Addressing defence and security corruption is in everybody’s hands

Citizens who have been victims or witnesses of corruption are realising that the ability to take action is in their hands. They also understand that this fight is not only for their sake, but also on behalf of all the people who are hurt by corruption around the world every day.

Taking part in the solution to corruption is not an easy task. Resisting paying a bribe or reporting corrupt behaviour often means swimming against the tide. Only 30 or so countries have legal doctrines in place to encourage such disclosures and protect those who blow the whistle from retribution and retaliation. This is why Transparency International provides mechanisms to support, protect and motivate action against corruption, such as whistleblower protection and civilian oversight, are so important. When those are in place and enforced, no one needs to remain silent to corruption or have to confront it alone. 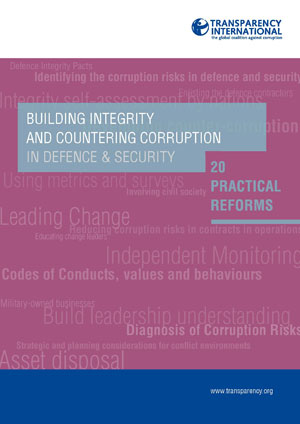 Nowhere is this more important than in the defence and security sectors. Such critical areas, though, are often the least accessible for people wanting to see proper accountability. Defence and security establishments have a historical legacy of being closed and unwelcoming to transparency, as national security concerns are often abused and become a veil to hide corrupt activities. For example, Costa Rica, a nation which abolished its armed forces in 1948, was the only Latin American country that achieved high defence budget transparency standards in our report on the topic. Whilst five other countries received moderate to high scores, the remaining 10 Latin American countries analysed ranked moderate or below.

The preconception of defence and security corruption as a dangerous and inaccessible area is beginning to give way to the idea that these issues can be actually tackled. Over the years our team has witnessed that often the people who most want to see positive change are in the military and the police themselves. We repeatedly come across senior military and police officers who are trying hard to make their organisations more transparent, more accountable, and more trusted by the public.

Our Handbook for defence and security officials,“Building Integrity and Reducing Corruption in Defence and Security: 20 Practical Reforms” describes our approach and recommendations to bring about this change. Our team has witnessed just how many nations have been keen to address defence and security corruption risks and now have successful stories to tell– from countries with strong mechanisms in place to prevent and tackle corruption, through those with serious corruption issues, to those in the worst of conflict environments where corruption is rampant.

Our new Spanish version of the Handbook is one of the tools that can now also guideLatin American governments’ efforts. Today, with Latin American citizens calling for stronger national security strategies and institutions, we hope this Handbook becomes a catalyst for change. 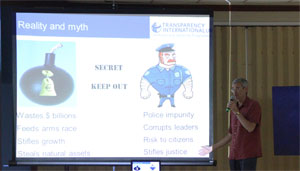 Just like its English predecessor, the Spanish version of this Handbook is our way of answering the questions we are asked about corruption, which have changed significantly over the last eight years. They have shifted from ‘why is defence corruption a significant problem?’ to ‘what should we do about it?’

One of the main areas covered in this handbook is how to lead change. We believe an essential starting point is for countries to make corruption reforms an acceptable topic of conversation among the top defence and military leadership. We still see that in many countries, defence and military leaderships too often do not discuss corruption. The defence corruption typology featured in this handbook can help to kick-start this discussion. It is in their interest to do so. Failing to address defence and security corruption risks means everyone will pay the cost. Defence corruption destroys trust in the armed forces, puts soldiers’ lives at risk, and wastes money which could have been used to improve education or healthcare.

One example of good practice in this Handbook is from Colombia, where the Ministry of Defence changed procurement rules to require that all future defence contracts be non-confidential as a rule. When the need would arise to classify a certain contract it would need approval by the Minister himself. This subtle shift of emphasis has had a profound impact on transparency in the country.

This is but one practical example of the 20 reforms outlined in this publication which can provide a practical contribution to tackle defence and security corruption risks.