Where do Multinational Corporations go on their holidays?

…and how much money do they spend when they get there? Despite their global reach, Transparency International’s recent Transparency in Corporate Reporting report – which assesses 105 multinational companies’ anti-corruption reporting –  shows that these companies reveal very little information about their financial and non-financial contribution to the countries in which they operate. The European Parliament is now calling for legislation to require companies to report financial information on a country-by-country basis.

It’s that time of the year when the question on everyone’s lips is “so, where are you going on holiday?” Well, corporations are people too, at least according to Mitt Romney, and so it is only natural to ask where some of our best-known companies will be spending their vacation. The answer to these questions and much more are available in our new report, Transparency in Corporate Reporting, where we assess the transparency of the world’s biggest companies, ranking them in part on how much information they disclose about their financial contribution to the countries where they do business.

By their nature, these businesses are inveterate globetrotters, so there’s an enviable list of destinations to choose from. Take Barclays for example. If ever someone needed a break it’s this benighted institution, reeling from a string of scandals involving tax avoidance and manipulation of key interest rate benchmarks. Fortunately, it has 53 possible locations to choose from. These range from developed OECD countries (Denmark, Canada and the US for example) to G20 tigers (Indonesia, Brazil) to sunny island getaways such as the Cayman Islands and Cyprus. If its nerves are not too shredded, it might fancy more exotic subsidiaries in Zimbabwe, Rwanda or Mozambique.

Knowing where multinational companies are located is one thing. Knowing what they do while they’re there is quite another.  Our report shows that companies still reveal very little about their local operations.  Let’s be clear: the fact that multinational corporations make profits is a good thing. Governments can use the taxes on these profits to fund their health and education programmes. What we are asking is that these financial flows are made public so that citizens can hold their governments to account to ensure that they really do benefit wider society and not just favoured elites. 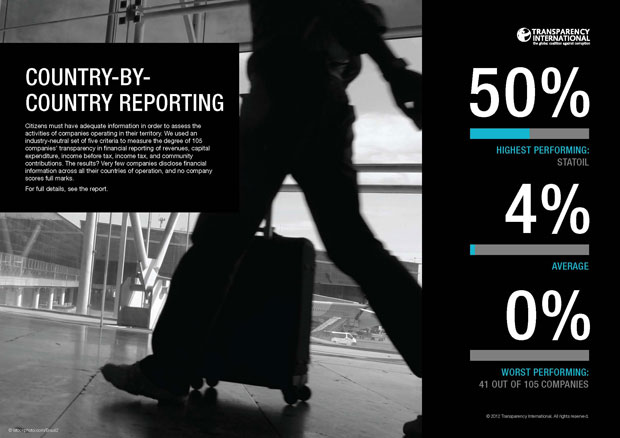 Unfortunately, Barclay’s website does not reveal a single penny of the corporate income tax it paid in any of the 53 jurisdictions in which it operates. Nor does it reveal what it invested in expenditure on capital projects such as buildings and other infrastructure. Nor does it disclose any information whatsoever about profits, community contributions or political donations. Only in 3 countries – UK, US and South Africa – did it publish figures for its revenues, which raises questions about the selectivity of these disclosures.

Barclays is a poor performer even among its peers. Its score for transparency of country-by-country disclosures is 1% compared to an average of 2.3% for the financial services companies ranked. The reluctance to open up world-wide operations to scrutiny extends to all sectors however. The average across all corporations we ranked was 4%.

For legal and accounting purposes, multinational companies like to maintain the fiction that they are a unified global entity. But the impact of their behaviour is always local, whether that is measured in terms of wealth creation, the impact on the environment or on governance.  Disclosing basic financial information on a country-by-country basis allows citizens to ask fundamental questions about whether those impacts are beneficial and how the wealth that is created is shared between companies and governments.

HSBC used to pride itself on being the “World’s Local Bank”, but is only marginally less shy than Barclays when it comes to demonstrating its contribution to local economies. It has subsidiaries in 83 jurisdictions around the world, but only 28 of them report financial data of any kind.

This may be particularly important in resource-rich countries like Mozambique, who, desperate to capitalise on a global commodities boom, often exempt multinational extractive companies from a whole range of taxes. Countries with more developed governance systems are increasingly concerned as well. With public treasuries in Europe feeling the austerity pinch, they are also demanding that there should be an informed debate about whether the private sector is shouldering its fair share of the burden.

For these reasons, the European Parliament has been pressing for the introduction of a mandatory country-by-country reporting regime in the EU for all corporations. Such a regime has already proposed for the oil, gas, mining and forestry sectors, industries that we have identified as being particularly prone to corruption and account for much of the revenues of the poorest, worst-governed countries. Accountability is a concern for these MEPs, but they have also made an explicit link between such reporting and the need to combat tax fraud and transfer-pricing abuse.

A crucial committee vote on these proposals is set for the 18 September. If this vote is confirmed by a plenary sitting of the European Parliament later in the autumn, negotiations with EU national governments will begin in earnest. There is a very real prospect of legislation being agreed in 2013. (as long as Germany supports it, more on this tomorrow).

The lesson for corporations is clear. Unless they become more transparent about the contributions they are making to the countries which host them, regulators will feel the need to impose these reporting requirements on them.

Next time multinationals go on holiday, they should think about sending some postcards home.