The US government has recently sent a letter to the German government pushing them to support the publication of payments on a project by project and not just a country by country basis.

An old industrial dynasty from the German Ruhr region might play a role in blasting the envisaged transparency regulations for the extractive industry proposed by the EU commission. It is one of those typical German Mittelstand (SME) family-owned businesses, which was founded in 1842 by Wilhelm Grillo, and grew into an industrial giant, the Grillo-Werke AG. The core competence on zinc, the company focuses on zinc metallurgy and sulphur chemistry, has an estimated annual turnover of around 600 million Euro, around 1600 employees and is headed by Ulrich Grillo.

Having led the natural resources section of a major German industry lobby for five years, Ulrich Grillo plays an important part in the way Germany responds to European Commission plans to increase the transparency of the extractive industries. As already described in this blog, there is a depressing correlation between natural resource wealth and corruption. 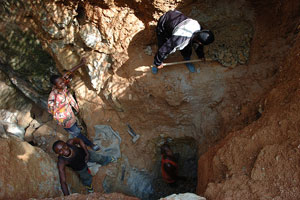 Transparency is a major weapon against graft in the oil, gas and mining sectors. Governments are started to mandate reporting of company payments and revenues in specific countries and projects. Two years ago, the USA decided on mandatory publication of payments to governments on a project-by-project level, as part of the Dodd-Frank Act. The European Commission followed suit and presented similar proposals (called the Transparency and Accounting directives), adding the forestry sector which had been omitted in the Dodd-Frank Act, and also included large unlisted companies.

But Germany’s support is lacking. It is difficult to figure out whether Germany is completely against the proposed rules, or just has reservations about certain details: for example, whether it is just opposed to the more detailed project-by-project publication of income, or if it wants to ensure that only listed companies fall under the new rules.

Other European nations, however, are baffled by the German reservations since Germany does not really have any substantive extractive industries. There is Wintershall and some others but compared to France, the Netherlands and the UK, the sector is rather small.

According to political observers, the German business lobby is playing an important role behind the scenes. The Federation of German Industries (the BDI) is the self-proclaimed „voice of German industry“. From 2013 it will be led by Ulrich Grillo, already vice-chair since 2011. Grillo has headed the BDI’s “commission on natural resources policy“ since 2007 (BDI Ausschuss für Rohstoffpolitik).

It is not only the type of industry Ulrich Grillo’s comes from, but also his recent activities, which make him an important player. He is considered one of the architects of the recently formed German Alliance for Securing Natural Resources (“Allianz zur Rohstoffsicherung”), under which German companies will work together to secure access to new mineral deposits abroad. It comprises big German companies such as BASF, Bayer, Daimler and Evonik ThyssenKrupp.

These companies fear running out of important raw materials without which their businesses cannot function.

There may also be instinctive philosophical barriers.

German Mittelstand companies are traditionally very secretive, their profits barely known. Maybe Ulrich Grillo follows this tradition, denying that large companies have the responsibility to be transparent about their social impact.

The BDI is assumed to have the ear of German ministries (Justice, Economics, and Economic Cooperation) that have the most say in the negotiating at EU level, since they are all run by the FDP, the junior coalition partner of Angela Merkel’s Christian Democrats. The FDP are traditionally partial to the views of German industry.

It will be a major blow for the fight against corruption if Grillo and the BDI get their way and Germany (along with other governments that seem to be opposing the proposed transparency rules such as Austria, Finland and the Netherlands) helps to prevent transparency of payments of the extractive industries for each and every project they run.

However, it would also be a counter-active strategy for industry. If you are not present in a market, it is in your interest that that market be transparent, especially if you are dependent on the raw materials that emerge from it. It is the companies already operating in a market who have less interest in making it transparent.

Let’s hope that German industry returns to the path of smart and strategic thinking and support the Commission’s proposal for project by project transparency of the extractive industry.