The ugly face of Latvia’s landmarks

If you have ever been to Riga you might have noticed impressive or beautiful squares and buildings. However, aesthetics are only part of the story that makes the history of a building or a place. Riga has numerous landmarks, several of which represent Riga in the popular imagination, which we suspect had irregularities in their construction.

Transparency International’s chapter in Latvia, Delna, held the “History of Ugliness” exhibition in 2009 to highlight the dark side of the landmarks that are the face of Riga. The exhibition has now moved to a more modern environment – the location-based social networking website Foursquare.

The aim of the exhibition was to bring the public’s attention to sites and buildings in Riga which are suspected of having been constructed using corrupt practices and to fuel discussions of urban planners of how to make the urban environment not only aesthetic but also ethical. The exhibition featured photographs of objects from the “ugly list” that Delna compiled.

We would like to see the main feature of glass – transparency – not only in our buildings but also when people tell the history of these building projects. Urban planning, architecture and construction concern all of us – it creates the environment in which we live.

Delna’s “ugly list” lists a selection of objects and places in Riga whose history can be related to corruption or unethical situations. Below are a few examples from the list. You can find the full list on Foursquare.

The Dienvidu Tilts or Southern Bridge is called the “golden bridge” referring to its excessive costs. The Riga City Development Department contract with JSC "South Bridge" differs significantly from the tender. SAO's audit of the bridge considered the waste of 27 million. 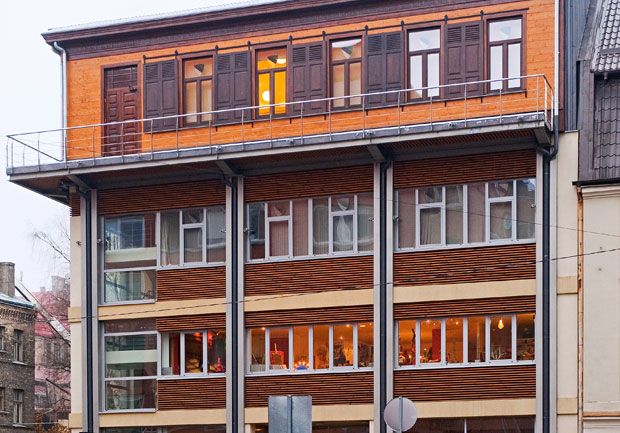 Permission was issued for renovating the building at Dzirnavu Street 36 and it was promised to preserve the old wooden building and reconstruct it as the original. In the end the old building was demolished by bulldozers.

Panorama Plaza store frame construction occurred without permits, ignoring the regulatory requirements. Builders found that the technical parameters of the building were not agreed beforehand, but the work was continued anyway.