Now even the businesses. Less and less people in Germany understand why the ruling parties keep ignoring the need to implement the requirements of the UNCAC (UN-Convention against corruption), and therefore fail to ratify this globally most important convention.

More than 30 CEOs of German companies have now written a letter to the faction chairs of the German parliament. The list is impressive and includes the CEOs from Allianz, Bayer, E.on, Deutsche Bank, Deutsche Telekom, Metro and Linde. The letter was a initiative of the German committee of the International Chamber of Commerce, which has a long tradition of working on anti-corruption issues.

The letter urges the German parliament to strengthen the offence of bribing parliamentarians: the major barrier preventing Germany from ratifying the UN convention. I have already described the German UNCAC debate in this post last year.

The CEO letter argues that it is harder for them to enforce anti corruption rules and agreements abroad when their business partner can point back to them and ask why Germany has not ratified UNCAC yet.

“The inactivity of the German government not only harms Germany’s international reputation and the reputation of the German parliament, but also the German export industry” says Peter von Blomberg, vice-chair of Transparency Germany. 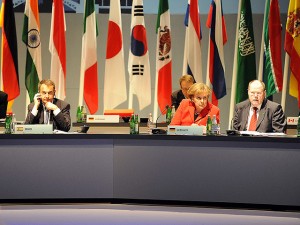 All G20 statements of the last few years have contained the sentence: “We reiterate our commitment to the ratification and full implementation of the United Nations Convention against Corruption (UNCAC)”. The German chancellor always agrees to this text at the G20 summit, but when she comes back home … nothing happens. There seems to be a growing disparity what she promises internationally and how she acts at home.

The CEOs’ letter has given free reign to the frictions in Angela Merkel’s Christian Democrat party (the CDU). For quite a while now, Bernd Busemann (CDU), justice minister of the state of Lower Saxony, has called on his party to change their tune. Months ago Norbert Lammert (CDU), president of German parliament, warned that the time to act had come. Only yesterday, Ruprecht Polenz (CDU), head of the German parliament’s important foreign affairs committe, for the first time publicly called for Germany to ratify UNCAC before next year’s elections, speaking with the German Financial Times.

In the meantime the world will wonder whether Germany is not committed to the fight against corruption, even though only the United States has prosecuted more companies for bribing foreign officials, as required by the international convention they have signed: the OECD anti-bribery Convention.