Better anti-corruption reporting but is it credible?

Scandals such as the revelations of banks misleading regulators on LIBOR are further eroding people’s trust in companies. Two in three Europeans, for example, believe that corruption is part of their country’s business culture.

One of steps for companies to restore trust is by publicly reporting on their anti-bribery measures. Once a company has done that, it can and should go further to raise the credibility of its reporting by getting independent assurance or certification for its anti-corruption programme. 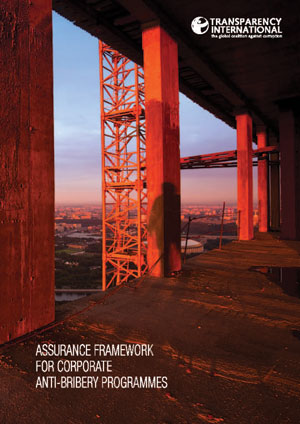 Transparency International’s latest report, Transparency in Corporate Reporting: Assessing the World’s Largest Companies, indicates that the world’s top companies have made some strides in reporting on their anti-corruption programmes. The average score of the 105 companies we looked at was 68 per cent, compared to 47 per cent in a previous review of reporting, in 2007.

This would appear to be an encouraging development were it not for the fact that six of the better performing companies, Astra Zeneca, Barclays, GSK, HSBC, Pfizer and Walmart, are currently embroiled in corruption scandals or allegations. Does this undermine the validity of assessing corporate reporting as in the Transparency International report?

No, because public disclosure of corruption-relevant data is a critical first step to combatting corruption. Company reporting supports greater corporate accountability as it allows stakeholders to understand and question the measures used by companies to counter corruption. Through reporting, companies can communicate to the world. They can explain the range of their anti-bribery efforts.

Our report identifies areas where companies are making progress such as training of employees. 80 of the 105 companies say they have anti-corruption training programs for employees, ensuring that efforts to stop corruption begin at the frontlines.

But companies mustn’t stop there.  In order to be sure that the companies’ policies are having the desired effect, a robust and comprehensive assessment is invaluable.

Despite the progress in reporting, an independent view is needed to ensure that company reporting is credible. To support companies and assess the effectiveness of their anti-corruption measures, Transparency International has launched a new tool. Published on 21 June the Assurance Framework for Corporate Anti-bribery Programmes provides criteria for assurance on the design of the anti-bribery programme at a specified date.

This tool will be useful for a company that has crossed the t’s and dotted the i’s on its anti-corruption policy, but  wants to demonstrate to internal and external audiences alike that the design of its anti-bribery programme matches up to what it professes.

If more of the companies in our corporate transparency report used assurance tools like this, then observers, including investors, employees and regulators could show greater faith in the company’s management of the risks of bribery and corruption.  What do you think? Would you be reassured about the integrity of big companies if you could read about their anti-corruption programmes on their website and they had been assured by independent third parties?