Barriers to preventing corruption: what do businesspeople say?

Last week, on 12 September, three former Hewlett-Packard managers were charged in a corruption investigation over improper payments aimed at winning a 35 million euro (US$45 million) computer sales contract in Russia some nine years ago.

The former German Hewlett-Packard subsidiary has been charged with bribery, breach of trust and aiding in tax evasion. But equally as responsible as the managers at Hewlett-Packard for paying these bribes, are the alleged recipients of the illegal payments: the Chief Public Prosecutor’s Office of Russia.

The Russian authorities responsible for putting in place and effectively enforcing the laws and processes to prevent corrupt practices from taking place must also shoulder responsibility for such an offence. The same is true for those people around the case who may have suspected wrongdoing, but turned the other way and accepted or tolerated bribery as a fact of life or a way of doing business.

In order to understand why we continue to hear stories of bribery and corruption involving businesses, Transparency International asked businesspeople themselves what they thought the main barrier to stopping corruption in the private sector was. We gave the 3,000 respondents to our survey several options: 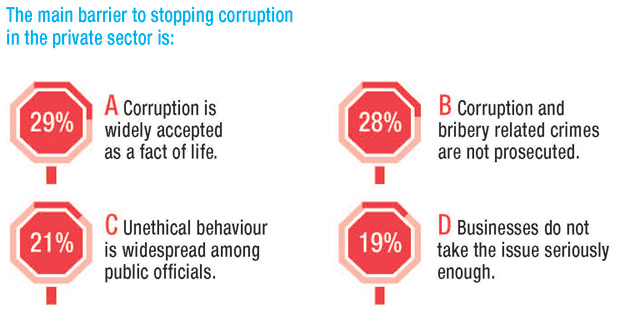 Our results found that the four options we specified were all recognised relatively evenly across the total sample as being the main barrier to stopping corruption, with just 3 per cent answering ‘none of these’.  Clearly all these agents and issues have a role to play – both in perpetuating corrupt practices and in doing too little to prevent and fight corruption.

We conducted this survey in 30 diverse countries around the world. And when we look at the results of this question by country, we find some important differences. Unlike the total results, in certain countries there is a strong feeling that one particular issue (of those listed) is the main barrier to stopping corruption. For example, in France, the UK, Hong Kong and Singapore, the finger was pointed squarely towards the business sector for not taking the issue seriously enough.

In Morocco and South Korea, the behaviour of public officials was the issue of most concern.

In Senegal, Turkey, Hungary, Nigeria and the Philippines it was the lack of prosecution of those guilty of bribery and corruption, whilst the sense that corruption is accepted as a fact of life was seen as the main barrier to stopping corruption in Pakistan and Egypt.

These results help us to identify particular issues and agents, to which we can target anti-corruption efforts, but it is also interesting to understand more broadly why the priority issue varies between countries. This, I think, warrants a more considered analysis outside of this blog.

But ultimately it is clear that for a private sector to be built on integrity, all agents must take responsibility for their position in the corruption web and together work to ensure a corruption-free business environment.