Corruption and insecurity in Central America: There are no solutions without transparency

11 October 2012 in Americas, Defence and Security, Politics and government

Arms trafficking; clandestine landing runways; large cargos that cross borders and are not detected; empty new buildings; bullets shot between rival gangs; impunity when violating the law. These suspicious activities and crimes occur in Latin America on a daily basis, and are even more virulent in Central America.

Criminal activities make the lives of Central Americans stressful and dangerous as the safety of citizens deteriorates. To make matters worse, on numerous occasions criminal organizations have managed to infiltrate the very public agencies in charge of fighting and preventing crime, such as police departments.

According to the Global Corruption Barometer 2010, the police are perceived to be one of the most corrupt institutions in Latin America. According to the Latinobarometer 2011, only 33 per cent of the population trusts the police. The lack of transparency and accountability mechanisms has created a favourable environment for criminal organizations to operate. 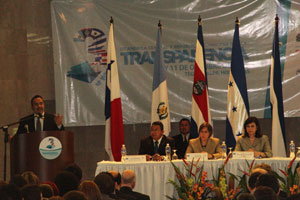 Alejandro Salas, Regional Director of the Americas at Transparency International speaking at the Forum.

The Central America and Dominican Republic Transparency Forum, which will be held in Honduras from 10 and 11 October, aims to encourage co-ordination to advance in the fight against corruption and promote access to information, accountability, and people engagement initiatives. These are all key elements to strengthen public safety systems and stop criminal organisations from operating.

Through this forum Transparency International, the Association for a Fairer Society and the Government of the Republic of Honduras seek to update and analyse the agenda on transparency and the fight against corruption so that it can better tackle the problems in the region. Furthermore, the forum will help promote good practices that could serve as a model for other areas.

While the second forum held in Costa Rica focused on understanding the link between transparency and safety, and on identifying ways of tackling the issue, the third forum will broaden our knowledge of this link in the region described as one of the most violent by the United Nations.

The fact that public safety policies and anti-corruption policies are not being co-ordinated in Latin America makes this forum especially relevant. Finding bridges between these policies and community actors in order to improve safety conditions in the area will be the objective of the forum.

This text was translated from Spanish by Esther Banales, Online Communications Intern at Transparency International.