Green Climate Fund: with so much at stake we can’t afford foul play

Urgency and precaution are not easily reconcilable. The Green Climate Fund – which meets today for the second time – will have to negotiate that balance. As climate negotiations chug along laboriously, this global fund will ensure that much-needed investment is not stalled as a result. By 2020 it could be holding the purse strings for up to US$100 billion in climate money every year. 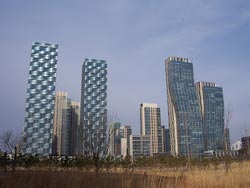 But not before it is decided how the fund will operate. Events in the lead-up to today’s meeting in Songdo, South Korea signal an inauspicious start to that process.

Currently the green fund consists solely of its executive board, inaugurated last month. An illustrious group of Finance Ministers, Environment Ministers, diplomats and bankers, board members have been tasked with crafting their fund from scratch – people, policies and systems to allocate and monitor spending. Until the fund becomes operational in 2014, board members will be quite literally writing their own rules.

It is hard to overstate the responsibility entailed. We are entrusting this global fund with spending scarce public resources as efficiently as they can, and leveraging the private capital required to meet the task of climate action. Ultimately these decisions will impact the success of efforts to reduce carbon emissions, raise us above ground level, shield us from storms and tidal surges, and channel water through drought.

Decisions made now – in these earliest phases of the fund’s existence – may seem procedural by comparison, but they will lend shape to the dynamics of decision-making for years to come.

This begins with this week’s vote on where the fund will sit – an appealing prospect for any country, as alongside prestige it will attract hearty investment. In the running are Germany, Mexico, Namibia, Poland, South Korea and Switzerland.

At Transparency International we have been watching this carefully. Corruption scandals in Olympic and FIFA host country bidding processes have shown how bribery can buy votes when billions of dollars are at stake. Signed Fair Play commitments, it is hoped, will ensure that each country enters the contest on equal footing.

No such public commitments exist for the green fund. Board members are not subject to codes of conduct or conflict of interest policies either, because they haven’t yet written them. While the fund’s rulebook is blank, it follows that its members might exercise a degree of discretion in their modus operandi.

It seems they already are. Transparency International received a report alleging that one of the bid countries was offering honorariums of US$2000 to board members to take part in a conference. Paying panellists’ expenses is not uncommon, but with such high figures involved, our informant saw this as an attempt at swaying opinion in that candidate’s favour.

When we inquired, the country representatives assured us that they did not consider this sum of money excessive…

When we inquired, the country representatives assured us that they did not consider this sum of money excessive, “considering the participants’ expertise, reputation, time and contribution.” Some board members, they added, had declined the honorarium entirely. Their letter concluded that, “we will take your concerns into account and will adjust the amount.”

As for another authority on the matter, the United Nations – the fund’s interim secretariat – told us that they cannot intervene in events external to official meetings. This raises some salient questions about the accountability – present and future – of the fund. The board is required to report to the UN at the upcoming climate conference in November. Until then, who is responsible for following up on this claim, or others to come? The 195 member states?

We trust that the fund’s board are people of competence and integrity. But trust needs reassurances. We are asking that these people set the bar high when it comes to ethical, anti-corruption standards – that transparency trumps privacy and that clear chains of accountability mean that people are directly answerable to their actions.

A chief element of any anti-corruption strategy is independent oversight. Board members will be deciding what information they should and shouldn’t disclose to the public, appointing auditors, designing monitoring frameworks and instituting a body to investigate them in cases of suspected corruption and fraud. It is crucial that oversight staff are truly independent, not compromised by whoever writes their paycheck. Citizens should also be allowed to have a say in decisions that affect them, and report wrongdoing without fear of retribution.

Getting this right now will boost the fund’s credibility and set the tone for the very many people who handle climate money further down the line – government ministries, development agencies, banks, companies and NGOs. Climate finance is ultimately about human survival. It is urgently needed, but we first need to take the time to build the checks and balances that will protect it against loss, waste and abuse.