What comes to your mind when you hear the word hacker? Most of us think hackers are hacking computer security systems to steal important and confidential information. It is only partially true, since there are hackers who contribute real solutions to social problems such as corruption. 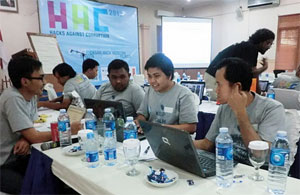 When we asked participants of the global Transparency International hackathon that took place on the first weekend of October who considered themselves a hacker, many raised their hands, explaining that they did not see “hacker” as a bad word, and that their role is often misunderstood.

One said, “Wikileaks is a collection of hackers who disclose hidden information to the public. It helps people to have access to better information.”

Responding to the “problem statements” presented by seven participants, our friendly hackers were extremely excited to contribute their skills to provide a technological platform that would address corruption problems. He hopes it will rectify public misperceptions about hackers.

The hackers know better than anyone that for social media to help fight corruption, we need to create additional applications that people can use to communicate with each other directly. Twitter has already served as a powerful communication tool has already happened in Egypt.

Teten Masduki, secretary general of Transparency International Indonesia argues that Wikileaks developed as a form of disclosure to dismantle some of the control over information held byelites. “In Indonesia, Facebook and Twitter are a way to curb corruption,” he explained.

Teten observes that ministries and state agencies have not provided enough information for the public. They provide very limited basic information. “This has little benefit for the community,” he said.

Finland and Iceland, for example, has started crowdsourcing a new law and constitution respectively.

Programmers, developers, graphic and interface designers and anti-corruption activists joined us in Jakarta from South Korea, Cambodia, Fiji, Indonesia, Malaysia, Sri Lanka, and Vietnam. Participants from Indonesia also came from various areas such as Jakarta, Semarang, Batang, Yogyakarta, Bandung, Bekasi, Balikpapan and Makassar. They submitted 12 “problem statements” – challenges in our daily efforts to fight corruption that we want technology to help with:

The Hackathon was held in 5 countries simultaneously. Beside Jakarta, Transparency International organised the same event in Moscow (Russia), Bogota (Columbia), Budapest (Hungary), and Vilnius (Lithuania). The activity was streamed worldwide from each location so that participants can exchange reports and share the atmosphere.

The above was adapted from an article written by M.A. Maulidin, Editor of klikmagz.com.