The power of journalism as an anti-corruption tool

From 7-10 November 2012, more than 1,000 people from around the world will gather in Brasilia for the 15th International Anti-Corruption Conference.

Brazil is a particularly interesting setting for the conference. Whilst discussing and debating some of the most pertinent corruption problems and solutions, one of Brazil’s biggest corruption cases in history – the Mensalão (or big monthly allowance) case – will be playing out in the Supreme Court. The case has captured the attention of people all over the country and region, so much so that a group of professors have set up an on-campus “situation room” to provide live commentary to the media.

In another high-profile Brazilian case, a team of Folha de São Paulo journalists produced a series of reports, in what the jury has called a “classic piece of investigative journalism”, that ultimately led to the resignation of President Dilma Rousseff’s Chief of Staff. The reporters started their work following a simple and isolated incident: the purchase of a luxury apartment in São Paulo. They then came across other leads and patiently followed them until they managed to discover and expose a huge illicit enrichment scheme. The investigative journalists were critical in bringing this case to light, in an example of the power of journalism as an anti-corruption tool.

In the latest results released today from Transparency International’s Putting Corruption out of Business data, we find that business people agreed. In Brazil, 70 per cent of the business people surveyed said that investigative journalism was either effective or very effective in the fight against corruption in the private sector. And it is not just people in Brazil that think that. From Poland to Pakistan, the business people surveyed think that investigative journalism can play a really important role. In most countries surveyed, more people believed in the effectiveness of journalists than in national anti-bribery laws (as shown in our latest interactive graphic). 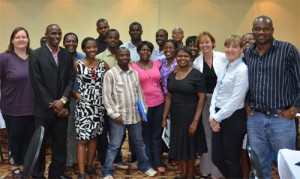 Transparency International recognises the importance of a free press and the valuable work of investigative journalists. We’ve conducted a trainings for journalists on the technical aspects of investigating complex corruption cases in a range of places, from Kenya and Malawi (see the photo at right) to Sri Lanka. We’ve also collaborated with the Instituto Prensa y Sociedad on a Latin American Journalism Award. And helping young journalists hone their craft is also a focus of this year’s International Anti-Corruption Conference.

Of course investigating and bringing a corruption case to light is just one part of the anti-corruption story. To stop corruption, investigative journalists must be able to work in an environment where whistleblowers are protected so that they can share information with journalists, where citizens reading the news do not tolerate corruption and demand better from their society and their leaders, where anti-corruption legislation is adequate and effectively enforced, and with no impunity so that the guilty can be held to account.

It is clear that journalists are critical players in the anti-corruption fight and I looking forward to learning more from the media as the Mensalão case develops during the IACC conference, and also to how the next generation of young journalists can be inspired to play their role in the fight against corruption.

More results from the Putting Corruption out of Business survey

The latest interactive graphic (question 7) from our series focuses on measures external to companies which can counter corruption in the private sector. The country-by-country results are shown below, where the percentage indicates the number of respondents from a country who believe the measure is effective or very effective. As discussed in this blog post, investigative journalism is often viewed as a highly effective tool in the fight against corruption in the private sector.