A watershed in Brazil

19 November 2012 in Americas, Politics and government

After a wait of just over one month, Brazilians found out last week that their judicial system is serious about sending a message that those in power can be held to account. On November 13 the Supreme Court in Brazil sentenced one of the leading politicians in the country, José Dirceu former chief of staff to President Lula, to 10 years and 10 months in prison for corruption in a vote buying scandal that was uncovered in 2005. He was convicted on October 9th.

The current president, Dilma Rousseff, told a Spanish newspaper that she would accept the decision of the court. Next week the judge who received the most plaudits for his outspoken and firm approach, Joaquim Barbosa, will become the president of the Supreme Court.

The mood of the people in civil society is clear: this is a major milestone for the judiciary.  We hope, as I said when Dirceu was convicted last month, that this scandal, known as the Mensalão, for monthly payments, taken together with new laws to stop criminals standing for elected office (Ficha Limpa) and the new Law of Access to Information – will mark the beginning of a new era for Brazil and the fight against corruption.

Most Brazilians following the proceedings didn’t think there would be a conviction, much less a prison sentence, although Dirceu is unlikely to spend more much more than 18 months in jail because the trial took so long. Given that he will do time in jail, the sentence is much more than just symbolic.

Brazilians love television soap operas so it’s not surprising that millions have tuned in daily since July to follow Mensalão, a court-room drama set during President Lula’s first term in office showing the most important case of political corruption in Brazil’s recent history. 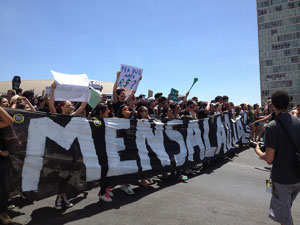 But this telenovella is fact, not fiction and when it came to a climax on October 9th, the whole nation held its breath: would the Supreme Court convict the powerful and important politicians?

This time it did, surprising a nation used to seeing their elites walk free from the courts.

This is a watershed for Brazil in the fight against corruption.

On October 9th José Dirceu, the former chief of staff of President Lula, became one of the  accused to be found guilty together with José Genoino  and Delubio Soares, former President and Chief of Finance of Worker’s Party  respectively. So far 25 people have also been convicted for crimes ranging from passive and active corruption (bribe takers and bribe givers), money laundering, tax evasion, conspiracy, embezzlement, mismanagement of financial institutions and false or fraudulent loans.

Most Brazilians following the proceedings didn’t think there would be a conviction, now it also looks likely that the convicted will spend time in jail when sentencing occurs in the next few weeks.

I hope this will mark a break from the past when powerful men and women in Brazil were accustomed to impunity, especially when it comes to the use of public money. If this group had gotten off, it would have weakened all our attempts to fight corruption.

The scandal involved paying off politicians so they would vote to perpetuate the Worker’s Party in power. The president of the Supreme Court called the sale of parliamentary votes an attack on democracy, and he is right.

What makes me most relieved about the court’s decision is that this will help in the fight against corruption. Alone it will not be enough so I hope it isn’t an isolated case but it will show people that there is a will to eliminate the corruption and impunity in our country.

Taken together with new laws to stop criminals standing for elected office (Ficha Limpa) and the current president, Dilma Rousseff’s intolerance of ministers caught up in scandal, the new Law of Access to Information – we may be entering a new era for Brazil.

My organization, AMARRIBO BRASIL, which is the Transparency Partner in Brazil, focusses a great deal of energy in spreading the anti-corruption message across all the country. We try to show how corruption does not pay and that it hurts the poorest in society the most. By convicting both corrupters and corruptees in a trial watched by millions, the Supreme Court has given us just what we need: an example of how that for even the most powerful persons, there is no impunity. Long may it last.