Aid from China, India and Brazil: more transparent than the West?

The growing presence in foreign markets of emerging economies like Brazil, China and India is starting to be matched by development spending. China, for example, provided US$ 38.83 billion in “foreign aid” in 2009 – these are the most recent government figures and likely exclude other investments in development projects). Often, these countries eschew the term “aid” in favour of “south-south cooperation”. The name may be different, but will it avoid the corruption that we have seen undermining the current aid landscape? The recent case of Uganda and aid monies from Britain, Ireland and Sweden and others allegedly being stolen by the government is just one of many sad examples.

Read more on this topic in our detailed web feature here

So far, development assistance from emerging economies is less transparent than traditional donors when it comes to disclosing where the money goes and giving locals a say. This is the finding of Transparency International and student researchers from Columbia University and Hertie School of Governance. We compared how traditional (Germany and the United States) and emerging (Brazil, China and India) providers of development cooperation operate in four post-conflict countries: Colombia, Liberia, Nepal and Sri Lanka.

The student researchers looked at basic things that any person might want to know: how much cooperation was provided, whether there was a master plan guiding it and if different local actors were involved in the decisions about how to spend this money.

Once back from the field, some of the researchers have reflected on their experiences and what they saw. 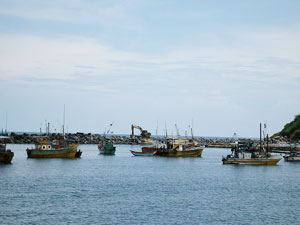 Michael Francis Craft, of the Columbia University team, was struck by a the story of a new port expanded at a cost of US$ 1.4bn project – 85 per cent funded by Chinese loans – but which continues to have complications becoming operational. It turned out that there were massive rocks under the water making expansion impossible from the start. This example evidences the costs of weak accountability and transparency mechanisms in China’s activities.

Because China’s does not regularly report its development funding for specific countries or projects, information on Chinese “aid” to Sri Lanka and projects like the port is not publicly available. We can only find out about it when the country getting the money reports it, like Sri Lanka does for all of its “donors”.

By contrast, Anna Levy, also from Columbia says that the US has made significant institutional strides, including a landmark policy shift in early 2011 to use independent project evaluations. USAID, the national agency that channels most of the US’s aid to other countries, has also stated its goal to tender its work to local contractors. However, USAID’s top 25 contracting partners are all private U.S. firms, creating complications for the accountability chain and transparency of information. And there are still other gaps, like the failure to systematically publish information by USAID on all funding and projects it gives to a country. In the study, no such information is public for Colombia or Liberia.

The findings of Claudia Mueller and Sandra Pfluger, from the Hertie School of Governance, show that India has low levels of transparency as it publishes neither country strategies nor the budget of India’s development cooperation for the current or for future years. But surprisingly high levels of accountability were found between India and the countries receiving its funding. For example, India undertakes joint budgetary planning as well as monitoring and evaluation with these countries – although how this happens is not open to the public (it is kept between governments).