Argentinians bang their pots for change

Thousands of people in Argentina have taken to the streets this year to protest, showing their discontent with the government by banging on kitchen pots and pans. Pablo Secchi, Executive Director of Poder Ciudadano, the Transparency International Chapter in Argentina, explains why they are frustrated and what corruption has to do with it.

What do the demonstrations represent for Argentina today? Many banners call for an end to corruption, what does this mean?

Pablo Secchi: The two marches that occurred this year were a result of dissatisfaction of a part of the population with the national government. They represent a part of society that has its own particular concerns: disenchantment with areas as diverse as insecurity, inflation, corruption, restrictions on the purchase of dollars, and weak institutions.

Argentina is undergoing a process of political polarisation, and these demonstrations are about this. Undoubtedly some recent events emphasise concerns about corruption. In the last year two incidents related to corruption have strongly influenced public opinion. The first was an accident in which a train careened into the terminal station causing the death of over 50 people. Poor infrastructure due to lack of investment, insufficient state oversight of the service, and suspicions of embezzlement of former Secretary of Transportation were given as causes for the accident. People began to see the worst effects of corruption. 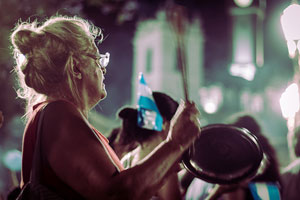 Why are the demonstrators banging pots (cacerolazos)?

On top of this came the judicial investigation into the Vice President’s Office on suspicion that it had links with the company responsible for printing currency notes. As a result of this investigation, the Solicitor General and Attorney were replaced and there was much debate around the issue of corruption. We cannot state that the demonstrations are directly related to corruption, but the issue is certainly a major concern of some demonstrators.

Pablo Secchi: The use of pans to protest first started in Argentina in the demonstrations during the 2001 financial crisis. Mainly middle class people use them on the streets to rally their neighbours and to get noticed. This has become a symbol of protest.The cacerolazos are in most cases against the government. The first cacerolazo probably occurred in Chile against Salvador Allende government in the 1970s.

What do you think should be the outcome?

Pablo Secchi:  Society is split. Some people are unhappy with the government while others are not.  In this context, it is difficult to envisage big changes  in Argentinean politics in the near future.  The government appears to side with the people who do not demonstrate and seems to underestimate the importance of the marches by suggesting they just represent certain interest groups.  This produces more discontent and more anti-government demonstrators on the street to counter this.  It seems that the government is focused on its own supporters to increase their support without trying to address the concerns of those that oppose it.

Are ordinary people affected by corruption in Argentina and if so, how?

Pablo Secchi:  Definitely people are affected by corruption. The case of the fatal train crash is a clear example of this. Institutions in Argentina are declining.  Especially if you look at the anti-corruption watchdogs, you see the weaknesses. Most have no real head or have appointees that are not independent.  None of them is carrying out serious corruption investigations against senior officials. In cases where there are investigations, these often do not make it to the courts and those that do are weakened by some means of other such as removing public prosecutors or judges when they begin to show some progress. The judiciary is in the eye of the storm these days, since the selection and sanctioning bodies of judges is being directly manipulated or ignored by the government. All this impacts the lives of citizens, both in their quality of life and in the people’s right to fair representation and access to an independent judiciary.