What the Corruption Perceptions Index means in different languages

We will publish the 2012 Corruption Perceptions Index next Wednesday 5 December. Behind the scores are many different kinds of public sector corruption, all with their own impact on daily life. Our evidence is language. Every language has its own particular expression for abuse of power. Here are a few.

In English, we refer to a “brown envelope” a little old fashioned in a world of wire transfers and subsidiaries in offshore secrecy jurisdictions. Greek uses the word fakelaki, the “small envelope”, which on average holds more than a little money (€1406 on average).

Writing about bribery in French is always a challenge since you cannot “bribe” as a verb. You have to pour a cup of wine, verser un pot de vin. The Russian word for bribe is “vzyatka” derived from the verb, “to take”. In English, meanwhile, we have graft, embezzlement, collusion, sleaze, etc. Explore the subtleties in our guide to corruption language, and expand the corruption lexicon in the comment area at the end of the page. 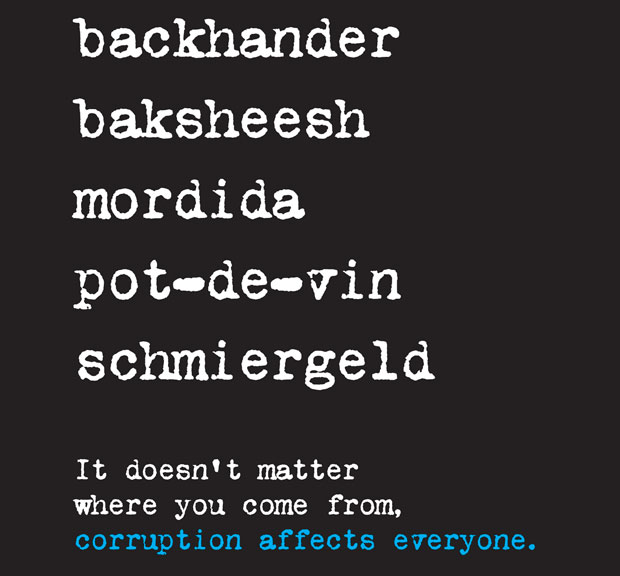 A few years ago Transparency International  ran an advert with various words for bribe, and the Economist wrote about it too, noting how using these words attempts to avoid calling corruption what it is: a crime

originally a Persian word meaning a tip, gift or donation. It still retains that ambiguous meaning: you’re as likely to be asked for baksheesh by a small boy who pointed you in the direction of the Al-Azhar mosque in Cairo as by a dodgy policeman. When it’s the latter, the ambiguity softens the illicit nature of the request.

In other words, they are euphemisms, an attempt to avoid the criminal implications of the act they denote. As long as the expressions are common, it means that people have accepted their very existence of the phenomenon and we have failed to tackle them.

While the words have been collected before, looking at which acts of corruption have popular slang terms reflects the biggest problems people face. In some countries petty bribery, in others, more subtle abuse of power, which the Corruption Perceptions Index also tries to measure.

The report warned that “by nature amakudari is tantamount to bribery with promises of reemployment in return for favourable treatment of their corporation.” Japan, of course, is not the only country where the “revolving door” phenomenon has been noted.

In a country where one person in two pays bribes in their daily life, there are more than a few commonly used phrases in both hindi and urdu for asking for a bribe: Chai-Nashta (“tea and snacks”), Kharcha Paani (“commission”, or literally, “money to spend for water and food”) and Suvidha Shulk (a “convenience fee”).

A recent New Yorker article gives us some new phrases from China: Touliang huanzhu – robbing the beams to put in the pillars. And Maiguan, a new word in Chinese dictionary meaning: To buy a government promotion. Very significant that new words are emerging as a rapidly-changing China battles corruption. We can add this to “guanxi,” or connections, using the art of relationships.

Please share your corruption slang, and the stories behind them.