Reposted from the blog of the Task Force for Financial Integrity & Economic Development.

Task Force member Global Financial Integrity released their newest report on illicit financial flows from the developing world last night. The report found that $5.86 trillion left the developing world due to crime, corruption, and tax evasion from 2001-2010, $859 billion in 2012 alone. The report uses a new, broader, methodology to estimate illicit financial flows, and the numbers should be considered very conservative. They also set up a very cool Explore page if you would like to delve deeper into the data. 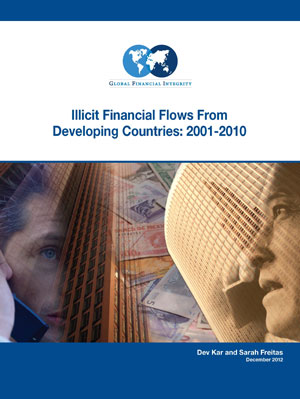 These illicit financial flows are one of the least talked about causes of global poverty. They drain much-needed capital out of developing economies, make it more difficult for governments to raise revenue, transfer money from corrupt public officials to safe havens abroad, and fuel organized crime. Most of the money ultimately ends up in tax havens and banks in the West. Because of this, they represent a massive, and still-growing, transfer of wealth from the poorest places in the world to the richest.

For years, members of the Task Force have helped bring to light the tremendous tragedy brought on by illicit financial flows, the global shadow financial system, and the human greed, corruption, and blight that they enable. Its time that the world did something about it. The Task Force recommends five courses of action that the international community can do to break down the systemic facilitation of illicit financial flows:

Here is the simple version: We have to make it more difficult for money to disappear. Transparent financial systems do not produce crime, corruption, and tax evasion on anywhere near the scale that opaque systems do. And if there’s an argument out there for why an opaque system is superior in any way to a transparent one, I haven’t heard it yet.

If you were constructing a global financial system in a connected world of mostly-liberal market economies, how would you construct it? Would you build in shell companies, opaque corporate reporting of income, sales, or odious tax information exchange? Of course you wouldn’t. None of this is technically difficult to accomplish, and none of it imposes significant compliance costs upon society of any kind.

Our leaders need to step up and fix this system. The developing world can’t keep having to swim upstream in order to grow, establish effective states, and provide a safe, prosperous future for its children.