Transparency International on the road of technology

US transparency activists taking part in a meeting of staff from Transparency International’s legal advice centres have written about the use of technology to fight corruption. This post was originally published in the Sunlight Foundation‘s blog and is authored by Júlia Keseru.

Great news for the open government movement: Transparency International, one of the key international actors in the fight against corruption recently announced to award grants to national TI chapters with ideas for mobilizing people through web and mobile-based technologies. Last year’s International Anti-Corruption Conference in Brasilia has already shown signs of TI’s increasing commitment to exploiting the power of Internet and technology and it seems that the Secretariat has made a significant shift in its strategic approach to explore participatory solutions of civil society. 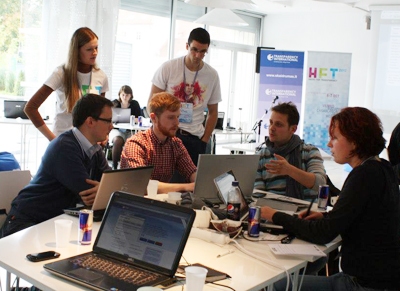 Hackers work together to fight corruption at the hackathon in Vilnius.

Sunlight has already built strong relationships with some of the local TI chapters experimenting with technology and its power to catalyze government accountability. We are now thrilled to see that through its People Engagement Program, the Secretariat has indeed embraced the potential of technology to engage people in its fight towards a more transparent and open society.

Here is a taste of the awarded projects. Read more about the ideas here.

With even more awarded projects from Cambodia, Hungary, Macedonia, Malaysia, Peru and Ukraine, Transparency International sets a great example of how a traditional research organization responds to the challenges and harnesses the potential of the digital age.