Thanks, British taxpayer! Thanks Royal Bank of Scotland

Banks are currently not everybody’s darling so it’s no wonder that they try to polish their image. I was invited last week to a Scottish evening hosted by the Royal Bank of Scotland — which is 81 percent owned by the British government — at the Skylounge of the E-Werk, a typically lavish party location in Berlin. Someone who knows the price of these things told me that you have to pay at least a five digit sum in Euros to rent it.

The Skylounge sits on top of the building on the eighth floor. You have a fantastic view over the centre of Berlin. When I arrived I heard the strains of a faraway Scottish piper. If the office windows of the German Finance Ministry, which is just across the street, had been open on that sultry evening, the public officials would have heard him too.

Waiters with champagne drifted among the 60 guests and although I stuck to water and orange juice, the more adventurous had a selection of fine malts to choose from, including Ardberg, BenRiach, Glenkichie and Springbank.

I don’t know how my name had made it on the invitation list but I am glad I went, and not just because of the food and a whisky tasting (of which I did not partake). Usually I avoid wining and dining lobbyism but I took the uncomfortable decision to attend the event, and see for myself what probably goes on nearly every single day in the capitals of the world. How did a public bank have the nerve to invite policy makers (and institutional clients) to such a lavish event? 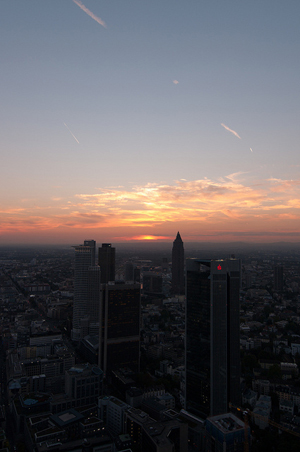 The financial district of Frankfurt

Ingrid Hengster, the Country Executive Germany of RBS, mentioned in her short opening speech, (in which she managed to quote Axel Springer, Walter Hallstein and Albert Einstein) that we are now in the fifth year of the crisis. She said people had different ways of viewing this: some call it a Eurocrisis, some call it a financial crisis and some call it a debt crisis. She did say that things had changed.

When I was sipping my water above the roofs of Berlin, I was thinking about the banks and regulation. I always wondered how much all this kind of lobbying by banks added to the lax regulatory world in which they operate. Or was it a combination of the wining and dining and the revolving door between industry and regulatory body?

I recalled that Mario Draghi, now the president of the European Central Bank, was with Goldman Sachs when it allegedly showed Greece how to cheat the European Union. Lord Stephen Green, the British Minister for Trade and Investment, was the Chairman of HSBC Holdings when HSBC allegedly laundered billions of dollars for the Mexican drug cartels.

The good news was that when I glanced over the dozen of name tags not picked up, I could not find a single one from the Ministry of Finance. Either they were already all there, or, what I rather suspect, no one came. The only two public officials I identified were from the German Transport Ministry and the German Foreign Office. There was, however, a long list of confirmed attendees from the German parliament and parliamentary staff.

While I sat on the rooftop, at 6.28 pm the Handelsblatt news ticker announced that the German parliament had just passed a bill for tougher banking regulation by approving the Basle III requirements.

Then the last sentence of the invitation to the party caught my eye. RBS declared that it had paid the tax on the presents it was offering its guests, so not to worry. Since 2007, the German income tax law makes it mandatory for tax auditors to inform the state prosecutors if there is a suspicion of bribery in company gift-giving. But, if companies say they have covered any tax obligations, they don’t have to provide the tax auditors with the names of people they give presents to. Transparency Germany thinks this is a useful loop-hole on the lobbying circuit.

When I left the event, I was offered a little bottle of single malt whiskey, which I refused. Others didn’t. RBS had not only paid for the gift but also the tax for it. Thank you, British taxpayers, majority owners of RBS.

Editor’s note, 14 June 2013: The first sentence of the fourth paragraph was adjusted to clarify that the author did not partake in the food and whisky tasting.