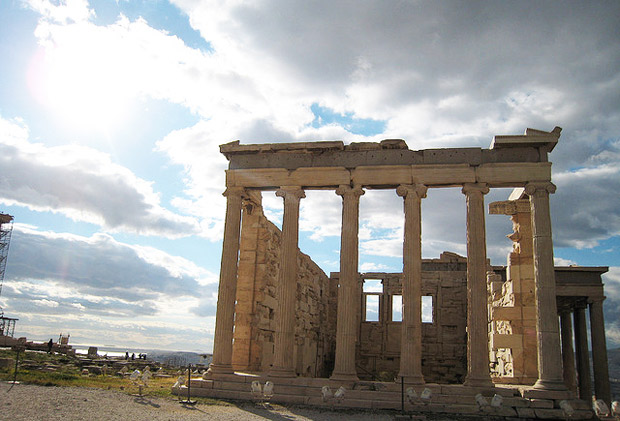 Greece is one of the few countries in Europe where there’s been an improvement in corruption perceptions: the country’s score rose four points in 2013.

As the European political and economic crisis enters its fifth year, there are few signs of optimism. The results of the 2013 Corruption Perception Index (CPI) for the region are no exception.

The story in general is one of stagnation: there are more than 27 million unemployed in the EU – a figure that continues to rise. There is also a continued lack of trust in government, both in the 28 countries of the EU and the wider region, as the OECD’s latest edition of Government at a Glance confirms yet again.

The CPI figures for the region confirm the pattern of stagnation and give us little to celebrate.

In 2013 corruption scandals continued unabated in the region. Among the dozens of high-profile cases were: the French budget minister resigning after allegations of tax fraud; millions of dollars and piles of gold bars seized from the homes of Czech officials; and a slush fund scandal hitting Spain – replete with Spanish politicians’ bags, briefcases and suitcases of stuffed with cash. All these continue to undermine public trust in institutions and governments, and raise public awareness that corruption is at the heart of the crisis in some of the world’s richest countries.

Spain has had a sharp drop of six points from last year’s CPI score, as its politicians, royal family and companies continue to be embroiled in allegations of graft, all while the country continues to suffer from recession and mass emigration.

Luís Barcenas, a close counsel of the prime minister and treasurer to the ruling People’s Party for nearly two decades, was arrested in January amid allegations of cash kickbacks for party officials, totalling tens of millions of Euros. It is of little wonder that the Spanish public are protesting en masse against corruption.

In addition to Spain, Portugal and Italy rank lower on the index in 2013 than they did in 2012. Like Spain, they are all in the vortex of the European crisis and appear to be doing little to combat corruption.

Although unlike in the other countries, there has been some progress in Italy, with the approval of the anti-corruption law, the establishment of an independent anti-corruption agency (CiVIT), and moreover, the application of the Law of Severino to 30 cases – including, finally, to Silvio Berlusconi. 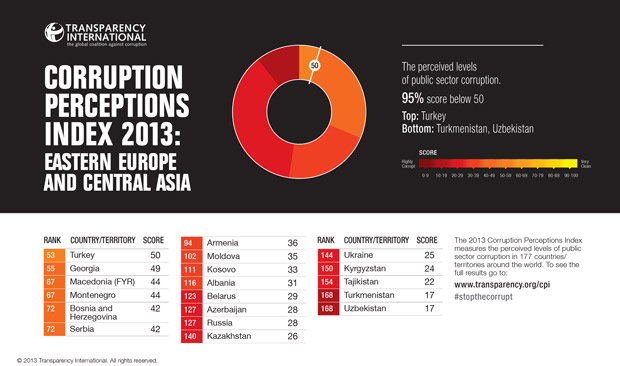 In terms of the CPI, Greece is clearly an exception to be welcomed. Although the country continues to suffer profoundly from the crisis, with youth unemployment edging up to 60 per cent, and continuing mass hardship, perceptions of corruption in Greece are improving. The country’s score rose four points in 2013 to 40, up from 36 in 2012. While still the EU’s lowest ranked country in 80th place, several high-profile trials of corrupt former officials and the launch of an anti-corruption strategy may be shifting perceptions and indeed, reducing corruption.

Further east, the CPI results for the Balkans are mixed but also confirm a general theme of stagnation. As noted by the European Bank for Reconstruction and Development’s recent Transition 2013 Report, the region is “stuck in transition”.

Perhaps as a result of pressure from Brussels, Croatia, which joined the EU on 1 July this year, has risen two points, notably imprisoning the country’s former prime minister and other officials for bribery earlier this year.

However, the countries of the region have a long way to go to catch up with wider European standards: Kosovo and Albania, for example, rank 111 and 116 respectively, at a similar level to Ethiopia, Egypt and Indonesia.

Public trust in institutions and political parties is at an all-time low and economies are stagnant or in recession; substantial reform should be on cards.

In order to bring an end to what is both an economic and political crisis across the region, the countries of Europe must do more to ensure transparency, accountability and the enforcement of anti-corruption measures. The link between the two is indisputable.