Ever since the South African government signed a US$4.8 billion deal to buy weapons from Swedish, British, German and South African defence companies in 1999, it has been hounded by allegations of corruption. The deal is still ongoing, and could still be cancelled. One of the justifications for the purchase was offset contracts – side contracts between the government and defence companies, unrelated to the deal and intended to boost the South Africa economy. The offsets were meant to run over seven to 11 years, create 65,000 jobs, and investments of US$10 billion (R110 billion). But in reality, offset projects created only 13,690 jobs. They only attracted around US$8.2 million (R6 billion) in investment. 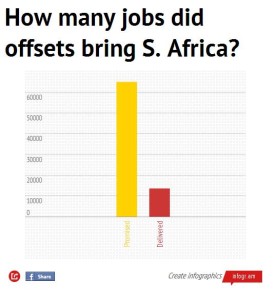 The arms deal has been subject to a controversial inquiry. Key documents have been withheld from witnesses, and there are serious questions about whether it will hold those responsible for corruption accountable.

Offsets played an important role in sealing the deal: they were used in the weighting system that decided who won the bid, so it wasn’t just based on what was the most affordable or useful for the Armed Forces.  They were also used to justify the taxpayer money spent on the deal.

In early February, two important documents relating to the arms deal and offsets were finally tabled in parliament: the Strategic Defence Packages Performance Review Report and the final audit report of the offsets package. These documents should have shed important light on what the offsets delivered. This appeared to be a small step toward transparency and it has turned out to uncover further evidence of malfeasance and mismanagement in the offsets package of the deal.

The internal audit covers less than half of the offset contracts included in the deal and reveals numerous failings. David Maynier, Shadow Minister of Defence and Military Veterans, has labelled it “devastating.”

Why haven’t the offsets contracts paid off?

The publication of the South African internal audit is the first time that such an offsets programme has been audited in the public domain. This case should prompt governments, companies, and citizens to look into offsets programmes, both proposed and ongoing, and ask: are they delivering what they promise?