Fighting corruption from the classroom

For the students of University Laboratory School, 3 March 2014 was out of the ordinary. They had been told by their teachers over the previous few days about an exhibition of cartoons, which would be held at their school premises. And not only that, a quiz competition and anti-corruption oath-taking ceremony would follow – something quite unheard of for these youngsters.

This blog post is part of a series
drawing on topics from the
Global Corruption Report: Education.

The students of the senior grades prepared themselves for the competition by brushing up on topics related to contemporary issues. The programme turned out to be more than what had been expected!

When the gates opened in the morning, the students – much to their delight – found the school building adorned with banners and placards carrying messages and visuals about corruption, ethics and morality.

Excited students take a look at the anti-corruption artwork.

At the corridor of the main entrance, cartoons were displayed on banners. The quiz competition was a full-house event in which more than 100 senior students took part. During intervals, leaflets and stickers about corruption were distributed among them.

“I know that corruption is something really bad and I can promise that I will never indulge in it in any part of my life,” said Mehedi, who took part in the programme along with his classmates. For Sumaiya and her friends, students in the senior grade, it was an eye-opener: “We always hear about corruption in the media, but today we got a chance to learn how it happens and the ways it affects our lives and education.”

Senior students preparing for the quiz, and the anti-corruption cartoon banner.

The entire event was part of Transparency International Bangladesh’s on-going efforts to promote integrity among school going children. Our youth volunteers, under the Youth Engagement and Support (YES) programme, have been running similar initiatives in schools in the capital Dhaka to sensitise children to the ill effects of corruption. “We found out that although adults have plenty of opportunities to learn about the issue through various mediums, it is the children who are always left out of an anti-corruption campaign,” said one of the YES volunteers.

Because of the sensitivity of the issue or lack of proper understanding on the best ways to communicate messages of integrity and anti-corruption, many school authorities are hesitant to talk about it in front of children. But things were different in the University Laboratory School case: the banners, stickers and cartoons helped get the message across to the young children in a medium they could understand.

The high point of the programme at University Laboratory School was the anti-corruption oath taken by all students, during which they promised to love their country and its people, and uphold the spirits of democracy, equal rights, justice and humanity. This is one of Transparency International Bangladesh’s unique methods of making the anti-corruption message accessible to children. 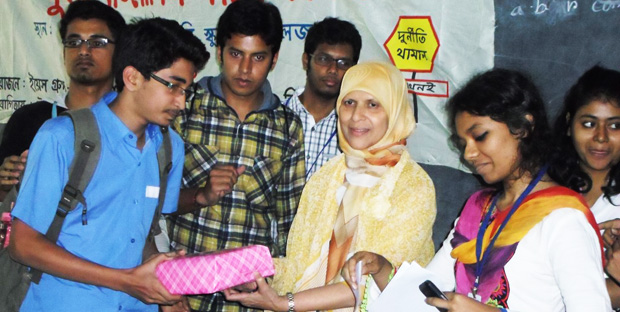 Winners of the quiz competition receiving their prize from the vice-principal and YES volunteers.

The vice-principal of the school Firoza Akhter was really impressed with the initiative: “I was very sceptical about the output of this event and did not want them to talk about an issue way beyond their understanding. And I am so happy that I was wrong!” she said.

Transparency International Bangladesh has long been engaged in promoting transparency and integrity in the education sector by running regular programmes with school authorities and parents, especially mothers. You can read more about these initiatives here and here.

We’ve also played a major role in getting ethics to be incorporated into school curricula. Last year we brought out a book of rhymes, Barnamalay Nitikotha, to teach children about values and the principles of right and wrong. The book has become very popular in schools where they were distributed and there are plans to work with the Ministry of Education for wider distribution.

As part of our wider focus, we plan to run special briefing on ethics in schools and distribute a range of ethics-related communication materials. It’s hoped that by involving parents and guardians, children, teachers, school authorities and the Ministry of Education, a strong foundation for ethical citizenship can be established.