Legacy of corruption: a challenge at the ballot box and beyond 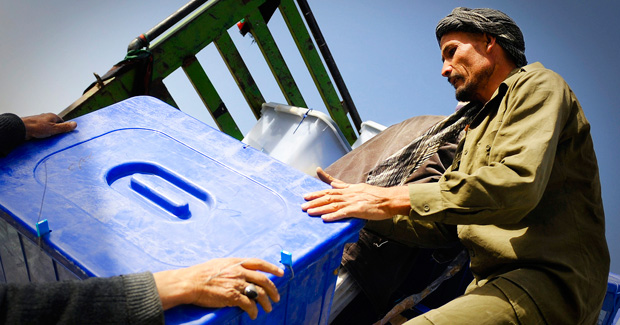 As Afghanis head to the polls this weekend for 2014’s presidential election, hopes are high the winning candidate will tackle crippling corruption head-on.

On 5 April 12 million Afghanis are expected to vote to select their next president. The leading candidates have expressed their fear of corruption on the day of the election: ballot stuffing, vote buying, impersonation and voter intimidation are likely to resurface as during the last presidential elections.

An unfair election will tarnish the legitimacy of the incoming president, but this only reflects part of the larger problem of tackling systemic corruption. If corruption continues as is, the promise by extremists to clean up the system will have a stronger appeal. That is why it is so important the current presidential candidates’ commitments are acted on.

Afghanistan needs to establish a rule of law that supersedes the patronage networks that have characterised politics and business for so long, and fostered corruption. Focusing on prevention – by educating people about the links between corruption, poverty and poor basic services – will help, as will a consistent application of punishment.

While this will not be easy in a country where nepotism is ingrained, there should be no impunity for corruption.

Many people who I talked to during my last visit to Afghanistan in March took a “wait and see” approach when queried about governance or corruption of the country. Clearly, the current administration has failed to establish a system of good governance and the present lack of political will in tackling corruption has led to a state of apathy and hopelessness.

This time around the candidates are again saying the right thing. Corruption, after security, is one of the key topics in the campaign.

Abdullah Abdullah, one of the front runners for the presidency, made tackling corruption a key election promise. In his own words: “If the security situation does not turn Afghanistan into a failed state, widespread corruption has the potential to turn Afghanistan into a failed state. I don’t have any problems with the stated policies on paper in fighting against corruption, but when there isn’t a political will, nothing will change.”

The other leading candidate, Ashraf Ghani, admits that many state sectors have entrenched corruption – and he is promising to deal with the underlying causes. In his words: “Cleaning up this type of corruption is a 10- to 15-year process. But the momentum moving forward has to be very real.”

These words may bring hope to Afghanis, who are tired of corruption in daily life, and to international stakeholders who confront corruption both in investment and development projects. But for now, they are just words.

All facets of life affected

The Asia Foundation’s “Afghanistan in 2013: a Survey of Afghan People” found that the population sees corruption as the second biggest problem in the country after security issues, affecting all facets of life and all levels of government.

According to Transparency International’s Global Corruption Barometer 2013, two out of three people who interacted with the Judiciary in Afghanistan reported being asked to pay bribes. Alarmingly, half of the people questioned also reported having to pay bribes to the police.

Institutions, which are supposed to safeguard law and order in the country, are failing in their prime duties. As a result, the same survey reveals that nine out of 10 Afghans think the country is run by a few big entities acting in their own best interests.

Many grand-scale corruption scandals have marred the country over the past few years and there is political apathy in resolving them. This, together with petty corruption – which robs people’s dignity as they try to access basic services – have clearly contributed to shaping the perception.

The country has slowly progressed towards improving people’s lives with the support of the international community. But it is corruption which poses the biggest challenge to this process and increasingly makes the country an unattractive and difficult place for international donors.

The spreading violence by the Taliban is making the country’s security situation more vulnerable, particularly as foreign troops pull out and hand over control to Afghan authorities. The extremists present themselves as the champions of anti-corruption, but it is a form of anti-corruption that ignores many of the principles of human rights and self-determination, access to information and space for civil society to hold authorities to account.

Unless a legitimately elected government quickly demonstrates its clear commitment to fight corruption, not just with words but with actions too, the extremists’ promises may well find favour among ordinary citizens.