Fighting for workers’ rights in Bosnia and Herzegovina

Ena Kljajić Grgić speaks with citizens at a street event in Banja Luka.

Imagine you were asked to work seven days a week, with no lunch breaks and no overtime pay. That you were forbidden to take a five-minute pause, or even to sit down. And if you complained, you would be fired on the spot.

Until recently, this was the situation that faced four female employees of a store in Bosnia and Herzegovina.

Like many employers in areas where jobs are scarce, their boss seemed to hold all the power. If a staff member quit – or got fired – they would have little chance of finding another job. Meanwhile a queue of job-seekers would be ready to take their place.

And yet, these women didn’t stay silent. In 2013 one of them sent a confidential message to our anti-corruption legal advice centre, asking for their help. Calling for an official investigation, our team started to suspect abuses went higher up than just the store owner. 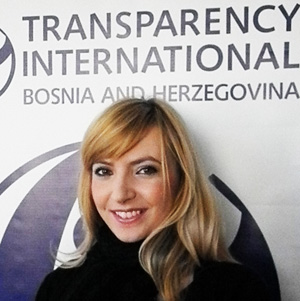 The story starts with the complaint from the employee. What did she tell you?

She told us that workers were being made to work nine hour days, seven days a week, with only two days off a month. They weren’t entitled to sick leave, and they were frightened that they might get fired if they asked for it.

Conditions in the shop weren’t just exhausting, they were degrading – employees were forced to remain on their feet at all times, even when there were no customers in the shop.

The employer would fire women on the spot if he found out they were pregnant. The same went for anyone who tried to complain about the working conditions.

You reported the case to the authorities, and they sent an inspector to check the conditions, yet the turn of events suggested corruption. What happened?

When we spoke to the employee to find out how it had gone, she said that the inspector and the employer had seemed overly close and friendly throughout the investigation. She suspected a bribe had changed hands.

She said that her boss had remained present while colleagues were being interviewed, meaning they weren’t able to answer honestly for fear of being fired.

Despite witnessing several major violations of the law, the inspector decided to give the employer the lowest possible fine of €50, and claimed he had not found anything problematic.

After he left, conditions remained unchanged.

How did you respond?

We all suspected foul play, but we didn’t have enough evidence to make a formal allegation. So we went to the national inspectorate to demand a second investigation. This time we asked for a different inspector, and we asked that the employer was not given advance warning that an inspector was coming.

We’ve already received written confirmation that the employer has paid the first set of fines, now we’re waiting to see what happens in court.

Meanwhile the conditions in the shop are improving. Employees now enjoy annual leave and, health insurance, they’re on permanent contracts, and their salary is being paid through banks – where it can be recorded – rather than cash in hand.

The manager was furious, and offered several workers €200 – the equivalent of a month’s salary – in exchange for information on who reported him. No-one would tell him.

He’s been heard complaining to customers that Bosnia and Herzegovina is a bad country, because “workers have too many rights”. We’ll remain in touch with the employee to ensure these rights continue.

How common are situations like this in Bosnia and Herzegovina, in your experience?

They’re common, unfortunately. Unemployment is high and some people would take any kind of job so as not to be unemployed – and if they don’t want to deal with the bad working conditions, there will be someone else who will.

But very few people actually report these violations. The situation in this shop was so severely bad that someone dared to complain, and of course they had heard of our work and knew we could help. But this is an exception – in most cases people stay quiet because they’re afraid of losing their job or can’t afford to go to court.

What needs to happen to help more people speak out?

We used Transparency International’s principles to evaluate the articles and submitted the results to parliamentary assembly and justice ministry. The law will continue to be worked on in the coming years, and we will continue to call for changes that ensure it is truly effective.