The 2014 World Cup had it all. Goals galore on the pitch, surprise results, tears and triumphs: a cornucopia of sporting excitement for a worldwide audience of more than a billion, culminating in a deserved win for an exceptional team from Germany.

But it also had a series of own goals off the pitch by those running the sport that highlight just why governance of football is in dire need of reform; and why the way World Cups are hosted – from construction to completion – needs to be revisited.

Sepp Blatter, the long-time president of FIFA, was loudly booed along with Brazil’s President Dilma Rouseff at the end of the final game before the German team collected its trophy. 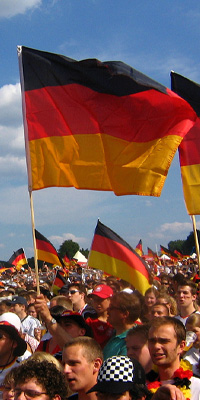 Clearly, the Brazilian government will have to investigate the allegations of corruption in the construction phase, which claimed a vast overspend due to procurement problems and the awarding of contracts to companies that donated to political campaigns.

Given the unrest caused by the multibillion-dollar price tag Brazil paid to stage the event, this inquiry must be both credible and transparent.

Before the kick-off in June Brazilians took to the streets to demand more resources for schools and hospitals – not overspending on football stadiums. They will not take kindly – nor should they – to the bosses of construction companies and the politicians they supported evading justice, if that happens.

Brazil goes to the polls in October and politicians will have to justify the World Cup spending, so there is a better chance that the corruption allegations will be taken seriously. As there will not be a residual glow from Brazilian success on the field – rather a humiliating hangover following the brutal 7-1 semi-final drubbing by Germany – the government will find it hard to sidestep the issue.

This is doubly true given that construction on the venues for the 2016 Summer Olympics in Rio de Janeiro is already behind schedule and has raised significant concerns for both human rights and anti-corruption organisations.

Staying in the limelight

Fifa is still facing allegations of corruption and bribery in the awarding of the 2018 and 2022 World Cups to Russia and Qatar – the report on an investigation is due in September. These allegations have already prompted five out of six main sponsors to issue press statements directly asking for the issue to be resolved.

In addition, an influential group of global entrepreneurs, including Richard Branson, Mo Ibrahim and Jochen Zeitz, issued a call for FIFA reform that coincided with the end of the Brazil tournament.

Being associated with FIFA nowadays is not a simple win-win situation.

If the investigation into the awarding of the World Cup to Qatar is seen as a whitewash, there should be even more pressure on FIFA from outside because little will be done internally.

Transparency International would like to see the sponsors keep up the pressure and perhaps enlist a few broadcasters – who contribute billions of dollars to FIFA’s annual revenues – to push for change.

Just days before the World Cup kicked off, FIFA declared that it has completed a thorough and successful governance reform process, even though the committee appointed to advise it criticised FIFA for not going far enough. That committee’s final report voiced concerns over the lack of independent oversight and the fact that FIFA grandees can stay in power too long, both points that Transparency International stressed in our own advice to FIFA back in 2011.

With the 78 year-old president Sepp Blatter planning to stand in 2015 for his fifth four-year term, many see FIFA as little more than the fiefdom of one man who can spread his largesse to an extended family of 209 football associations and the FIFA executive committee members. They have the power to vote for change at FIFA, but Blatter appears able to keep them on his side even as outsiders boo the organisation.

The World Cup will continue to delight most of the world, most of the time, but FIFA won’t unless it cleans up its act. While Blatter may stay at the helm with the majority of the 209 associations he courts laughing with him – all the way to the bank (the 2014 World Cup generated record revenues) – FIFA, the organisation, will remain in the firing line as long as corruption allegations linger.