What does monitoring campaign finance tell us about Czech elections?

Transparency International Czech Republic has been monitoring campaign financing in the eight largest Czech cities and the results are not good. They show that nearly one-third of the parties monitored posted a near-failing grade for transparency.

The recently published results show how secretive campaign income and expenses have become as campaigns get more expensive. 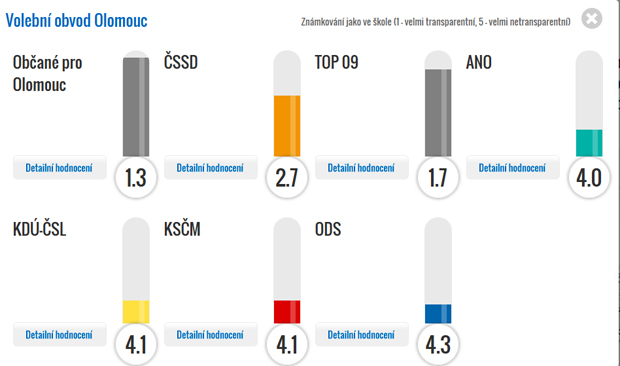 Campaign financing results in one of the cities surveyed by Transparency International Czech Republic.

Due to the absence of effective legal regulation and oversight of the financing of political parties, Transparency International Czech Republic has made a commitment to monitor the financing of the upcoming local elections. We believe voters have a right to be informed about every financial and organisational aspect of election campaigns.

Based on Criteria of Good Practice and Transparency, we asked 84 relevant local party sub-units in the eight largest Czech cities to answer seven questions on good practice and transparency. These answers, combined with information acquired through intensive consultation of public sources, were then condensed into a simple grading system in which one represents the best grade and five represents a failing grade.

The results for the local elections, which were published on 24 September, are generally poor: while some parties are fairly open in their accounting, most lack at least basic levels of transparency. In our survey, one-third of the parties scored below the grade of four. More troubling, we also have doubts about whether the published estimates for campaign expenditures are actually accurate and whether the parties’ headquarters have sufficient knowledge of their regional sub-units’ activities.

The publication of the results a week ago has already provoked reactions across the political landscape. While top-ranking parties gladly shared their grade via social media networks or in press releases, others felt misrepresented or attacked by our monitoring.

Sadly, many still seem to not understand how important it is to communicate transparently with voters. That said, some have learned from our past monitoring projects and set up transparent bank accounts or published more information about their campaigns than before. These positive developments prove that our repeated efforts for greater transparency in campaign finance do pay off and create positive change.

Additionally, in order to get a general impression of how large the campaigns actually are, we are mapping the campaign with the help of an app called ZmapujZo. About 400 billboards and posters have been photographed so far, and we’re still counting. As part of the election monitoring, we’ve also been collecting reports of possible election fraud, which are now being processed by our lawyers. Both of those projects engaged Czech citizens in the struggle for fair and transparent elections and election campaigns.

As a next step, Transparency International Czech Republic has now published the results from the monitoring of the campaigns for the Senate and will monitor the local elections on 10 and 11 October in cooperation with several other NGOs.