Across the Middle East and North Africa, Transparency International chapters and partner organisations used the International Right to Know day to petition governments to put access to information high on the political agenda.

We are calling for comprehensive access to information laws in countries where there are none and for greater implementation where laws exist so that citizens can get the information they need to hold their leaders to account.

On 28 September 2014, Transparency International sponsored a call on our Arabic Facebook page that reached more than 1.2 million people across the world in one day and engaged more than 36,000 citizens with the issue of access to information laws.

Five of our chapters and partner organisations in the region in Egypt, Kuwait, Morocco, Palestine and Yemen called on their governments to introduce access to information laws that meet international standards and to implement them now.

The governments in these countries have an opportunity to demonstrate their declared commitment to transparency, democratic values and human rights principles by concrete actions not words. For example, in Morocco our chapter has vigorously protested the vague language of the recent version of the draft law including abolishing the establishment of an information commission and restricting the right to access information to citizens unless legal interest is shown.

In September last year we published ‘It belongs to you: Public information in the Middle East & North Africa’ a series of reports and an interactive documentary which made a number of recommendations to improve legislation. One year on, we are keeping up that pressure. 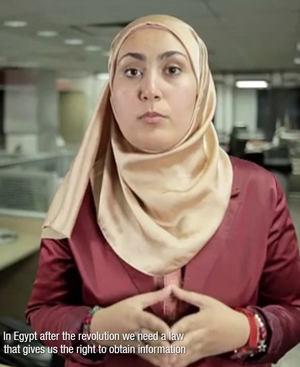 Access to information is an important cornerstone of fighting corruption in the Middle East and North Africa – as it is across the world. People need to know what their governments are doing and where tax revenues and other state income are spent. Without the political will, a legal framework to make this happen and the mechanism to enforce it, citizens will be left in the dark and corruption can flourish.

The right to have access to information, freedom of expression and a safe space for civil society organisations to be engaged in decision-making are central to democracy and human rights.

But passing strong access to information laws is only the first step. There needs to be active follow-up to make sure the laws are implemented. This should also be part of a comprehensive national anti-corruption strategy that involves civil society organisations.

Civil society acts as the representative of the people and can help develop, implement and monitor progress that is made in fighting corruption.

Transparency International will continue to support peoples’ demands and national civil society organisations to take more active roles in the region. Watch this space for further updates and, I hope, reports that our demands for greater access to information are being heard.