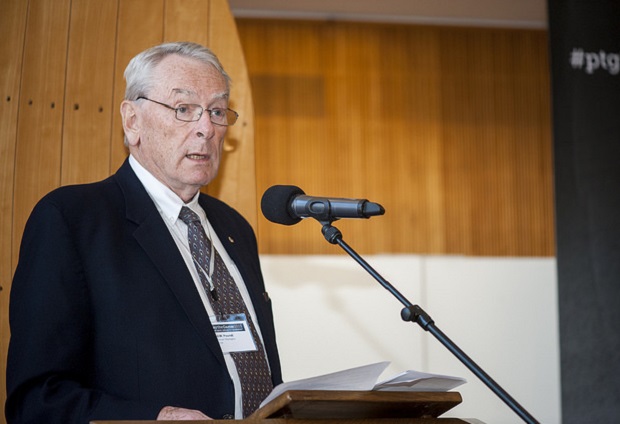 Richard Pound, chair of the committee reporting on corruption at the International Association of Athletics Federations (IAAF).

This week Richard Pound delivered a damning report on corruption at the International Association of Athletics Federations (IAAF). The former director of the World Anti-Doping Agency cited poor governance and cronyism as the reason corruption took root in international athletics and called for root and branch reform.

TI: What are the most serious corruption issues in sport now?

Richard Pound: I think you would have to break it down into different areas. The one that I have had the most experience in is doping and it is a form of corruption that actually affects the outcomes on the field of play. In that respect it is not only a sport crime of corruption but also because of all the money in modern sport it is also an economic crime. If somebody who cheats and wins and gets prize money, they are effectively stealing the money that should have gone to someone who was not doping.

Then there is corruption in the sense of governance, where the actions of those in power prevent the operation of the full democratic process, largely as a result of clandestine arrangement in which that leadership actually participates or it knowingly tolerates. Then there would be match-fixing.

I liked a definition I recently heard that said doping involves over-performance and corruption involves underperformance.

TI: Are these areas getting worse?

Pound: I think there is certainly more recognition that corruption is going on. One of the difficulties is that those who know what is going on and are willing to say so publicly, as whistleblowers or whatever is an appropriate term, are now treated far more harshly than the perpetrators, so there is a distinct lack of encouragement to have the facts be known.

TI: What can on organisation like the International Olympic Committee (IOC) do?

Pound: I think the IOC’s major action is probably not Olympic Agenda 2020 although it has had a lot more publicity. I think our main effort in this direction occurred in 1999 as a result of the Salt Lake City bid. There was a tremendous series of reforms that the IOC undertook, which frankly extended far beyond the particular circumstances of some members who were running around with their hands out.

Our moves to open our meetings, to publish audited financial statements, to have term limits, to stop the visits (of IOC members) to candidate cities were all quite remarkable. As was the creation of a code of ethics that we never had and the establishing an ethics commission with independent power to act and a budget to allow investigations to occur both at the direction of the president and as a result of any complaint by anybody against any IOC member.

The addition as a result of Olympic Agenda 2020 of publishing the amount of per diem expenses to members, the allowance paid to the president himself: all of that is now a matter of public record and we hope that by leading in those directions, we will encourage others to respond accordingly.

TI: What can the IOC do when member federations are accused of corruption?

Pound: All we can use is a combination of our moral suasion plus withholding television money that would be shared as a result of participating in the games from federations that don’t demonstrate good governance or actually withdraw the sport from the Olympic programme on a worst case basis.

We’ve done that in the past. We did that in respect of wrestling and we did it earlier in respect of boxing where the results were egregious and the conduct of the officials was equally egregious. I don’t know that we can go from largely zero activity to full-blown sanctions. We have started to say now that we would like to have a self-reporting on governance standards.

That can easily be expanded to provide model provisions. You can say we have provided you with samples. Have you adopted and implemented them? And if not, why not? Is there anything we can do to help?

The following step would be that we have attempted to get you to improve on this over a period years and you haven’t; it may mean that you don’t think that the Olympic principles are applicable to you and if they are not perhaps you should step off the Olympic ship and let somebody else on who does share the Olympic values.

So there are lots of things you can do to make the point.

TI: Is the idea of a global anti-corruption agency a runner?

Pound: Well it might work. You would have to get some kind of international consensus among the key players and that would include sport. But because you are dealing in areas where there may be penal consequences, you are going to have to have governments be enthusiastic about that. And the skill sets that that would require are quite different from the ones that apply in the case of WADA.

You would need people capable of very sophisticated financial analysis and tracing; you would need people skilled in criminal-type investigations but that said, there’s no reason why it might not be useful to have the coordination of those efforts under a central organisation which could perhaps, for example, encourage and enable the sharing of information. This would be one of your main hurdles in this kind of operation, especially with the European fixation on the protection of data.

TI: Does it matter that there is corruption in sport?

Pound: Well sport is a pretty important element in any society these days and the amount of money involved certainly attracts both organised and amateur crime. The huge transfers of monies through countries ought to be a concern in the general level of corruption, so I see no reason to carve out sport as an activity that is exempt from the same kind of behavioural standards.

TI: What should the IOC take up as an issue? Are they missing anything in their agenda?

Pound: You have to be careful not to turn yourself into an organisation that is a mile wide and an inch deep. The IOC is not going to solve all environmental problems; it is not going to solve all money-laundering problems and things like that. But it can certainly show that a well-governed, well-intentioned, disciplined organisation can have an impact on things. I think that the overall impact of the Olympic movement in world society has been nothing short of remarkable and it has demonstrated an extraordinary ability to respond to enormous social change and political change over the past 120 years. So if you can keep that kind of momentum going using the particular attraction of sport both as entertainment and a largely healthy activity by the younger generation, then you have made a meaningful contribution to the social order.

The interview was conducted in October 2015 at the Play the Game Conference in Aarhus, Denmark.