Picturing corruption isn’t easy. And its human cost, although very real, is often difficult to capture. But Transparency International’s Advocacy and Legal Advice Centres offer a way to do both, through their work advising the victims of corruption. The stories of those victims offer valuable insight into the forms of corruption and what it means for ordinary people.

Although it’s only been in operation for two years, the centre run by Transparency Palestine has been wildly successful. This along with the very particular political context made it a perfect candidate for capturing real corruption stories on film. With funding from the UK’s Department for International Development and the help of British production firm Rockhopper we set out to do just that.

In December I travelled to Ramallah in the West Bank to meet with the very capable Hama Zidan, who runs the legal advice centre. My journey there gave me a taste of the complex security situation and the serious logistical hurdles Transparency Palestine faces in its everyday operations.

After being warmly welcomed by Hama and her colleagues, we settled on a few iconic cases that would be covered in the film. One was the story of Muhamad Hallaq, an employee at the Ministry of Transport who took on the misuse of government cars for private purposes.

Together with the centre, he launched an advertising campaign complete with a hotline for people to call when they witnessed misuse of the cars. The campaign saved millions for the cash-strapped Palestinian Authority and highlighted the kind of systemic change the centre has excelled at.

We also looked at the story of Faraj Gath, a government body guard who lost his job in a political purge and ended up without severance or his last few pay checks. The loss of these resources had dramatic effects for his family. The assistance of the Centre eventually enabled him to recoup some of his losses.

And we interviewed Daoud Namrotee, whose two sons had been shot in police custody and left permanently disabled. Though there was a court conviction against the rogue policeman, he trumped the system via personal connections and walked free. The help of the centre put him back behind bars.

The centre helped each of these men in different ways. But I saw that, with the exception of Hallaq, there was still a great deal of fear in discussing personal stories. Fear, perhaps, of digging up painful memories but also of the political repercussions of taking on the system. 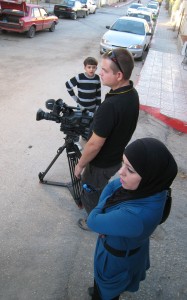 As a communicator, that reluctance was frustrating, although understandable. Together with the libel risks that an organisation like ours has to consider when telling real stories about real people, this means that the stories are not as vibrant as they could be. But despite these limitations, I think we ended up with a powerful document of work that is truly carried out On the Front Line.

We hope you’ll take a few moments to watch the film and learn a bit more about the lives and work of these exceptional anti-corruption fighters.