As UN Arms Trade Treaty negotiators met in New York last week Tobias Bock from TI’s Defence and Security Programme,  warned of the corruption risks that could undermine any result. He and Rob Wright, TI’s senior ATT expert and former UK Head of Export Controls, now look back at the meeting.

Last week, the 192 member states of the United Nations (193 from mid-week onwards, as South Sudan was admitted on July 14) met in New York to continue their negotiations towards an “Arms Trade Treaty” (ATT). States are keen to agree on an ATT in 2012, reaching a long overdue international agreement to finally regulate the global trade in arms. We represented Transparency International’s Defence and Security Programme and participated along with more than 100 other NGO representatives. 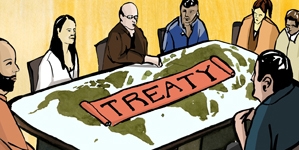 We were delighted to observe that the inclusion of robust anti-corruption mechanisms in an ATT received strong support last week from global investment funds, the defence industry, as well as the UN member states negotiating the treaty:

Towards the end of last week Ambassador Moritan presented an updated set of draft papers that indicate what a final ATT might look like in 2012. We were delighted to see that these papers include a number of useful anti-corruption provisions as well as strong anti-corruption language.

Many experts expect that Ambassador Moritan will soon start to draft the corresponding legal language. It is therefore imperative that States, global investors, the defence industry, and civil society maintain the momentum to ensure that the final ATT in 2012 does include strong anti-corruption provisions. Without these, it will be impossible to counter the devastating impact that defence corruption has on sustainable development, public trust in the government and its armed forces, as well as the ability of nations to pay a fair and uninflated price for the weapons they acquire to defend themselves.