Corruption on the rise in Europe

A public opinion survey finds that corruption is a major problem across the European Union. The survey was published today by the European Commission.

Two – thirds of Europeans believe corruption is a major problem in their country.

Corruption continues to be one of the most important challenges facing Europe, harming the integrity of the EU as a whole and its financial interests. This is something borne out by our Corruption Perceptions Index, which found serious problems of corruption in the EU with 9 countries scoring less than 5.

Across Europe there has recently been a sense of looming crisis and popular discontent with corruption, highlighting the urgency to address the problem. It is no surprise therefore that 98 per cent of respondents in Greece consider corruption a major problem, in contrast to 19 per cent in Denmark.

Half of the Greeks surveyed told the Commission that “the law is often not applied by the authorities in charge”.

Half of all Europeans think corruption has increase.

Many other countries facing crisis and big protests see corruption on the rise. This is the case for more than two thirds of people from Slovenia, Slovakia, Portugal and Romania. A big part of the discontent has been spurred by political scandals, and sure enough in Latvia, Slovakia, the Czech Republic, Slovenia, Spain, Bulgaria and Greece at least eight in ten think the financing of political parties is not transparent enough or supervised properly.

In Slovakia (where a third of people accept corruption as a part of daily life) and Romania, recent protests have shown citizens are fed up with corruption in their systems. Transparency International last week published a report on Romania’s institutions warning that they do not do enough to fight corruption, with particular problems at the local level. 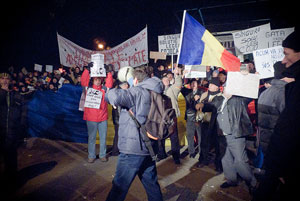 In Romania and Slovakia more than a quarter of people have been asked or expected to pay a bribe.

While we can take heart that there is high awareness of corruption, it is worrying to see that in eleven EU countries at least seven out of ten respondents think that corruption is unavoidable. Clearly, more people need to wake up to the fact that we can fight corruption.

Another issue to arise from the Eurobarometer survey is that many Europeans (73%) believe corruption exists in EU institutions – a belief no doubt fostered by a series of corruption scandals over time, including the more recent ´cash for amendments´ scandal in the European Parliament.

This is a similar figure to Transparency International’s last global survey, in which far more Europeans said corruption was on the rise than, say, Latin Americans (51 per cent). As two-thirds also say that corruption does not affect their daily life, the figures are a clear condemnation of politicians and public officials.

TI campaigns for greater transparency and integrity in EU institutions, providing expertise and recommendations to the institutions on integrity issues, such as the code of conduct for members of the European Parliament. This is essential to make sure that European citizens have trust in the institutions that govern them from Brussels.

Clearly much is amiss in Europe. TI has consistently advocated for the EU to raise its political voice on the problem of corruption. Last June the Commission finally published an EU anti-corruption package, which includes a mechanism which will periodically assess anti-corruption efforts in EU Member States as of 2013. This should help European countries to identify weaknesses and improve their anti-corruption frameworks. However, implementing these recommendations will largely depend on political will from national governments.

“Corruption can only be tackled successfully through the will and commitment of leaders and decision-makers at all levels,” European Home Affairs Commissioner Cecilia Malmstrom

The results of the survey and recent events across Europe demonstrate that greater efforts to tackle corruption are needed and wanted by EU citizens. It’s high time the EU and its Member States step up their action against corruption.
In the coming weeks, Transparency International will publish reports on corruption in Slovenia, Slovakia, Poland, Bulgaria and Greece. Watch this space…