Paying a high price for transparency – journalists under fire

For two decades, Sri Lankan journalist Poddala was renowned for exposing corruption in health, education and transport. He uncovered one of his country’s biggest ever tax scams. That was until he was abducted and brutally beaten. His fingers on his right hand were crushed and burned severely, making him another tragic example of the brutal lengths to which the corrupt will go to silence those who threaten their power.

Freedom of information is perhaps the strongest weapons in the fight against corruption, which is why it is so important that journalists have a safe environment to work. It is their investigations and reports that help citizens hold their governments to account. 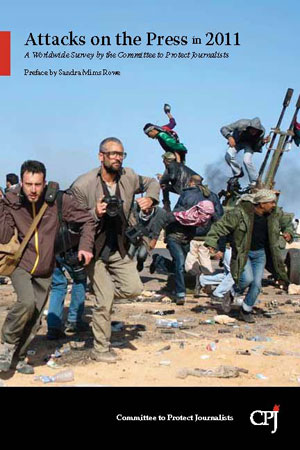 Today the Committee to Protect Journalists publishes Attacks on the Press 2011, a survey of the murders and harassment of journalists world-wide and the stories behind their persecution. It makes disturbing reading.

Far too many brave people are dying for doing their jobs – 46 in 2011 – most in the pursuit of news in dangerous regions, but as many as 21 for exposing crimes and writing about corruption. Many hundreds more face intimidation and harassment outside conflict zones.

The report also highlights what is likely to be a pressing concern in 2012: the use of technology in the media. Those who wish to suppress information are starting to use the very tools that spurred the revolutions across North Africa in 2011, most notable social media. In Syria, for example, the authorities used hackers to dupe bloggers and journalists via Facebook into identifying sources who were then arrested and tortured.

“Technology,” in the words of CPJ chairman, Sandra Mims Rowe, “is allowing journalists to slip the chains of censorship, but that newfound freedom will be fleeting if not defended.”

The section on Africa notes a worrying trend. Many leaders now argue that stability and development are more important than press freedom when they move to suppress criticism. This is happening in Cameroon, Equatorial Guinea, Gambia, Malawi and Uganda to name just a few examples.

Unfortunately, 2012 is unlikely to be safer for journalists than 2011. So far six journalists have been killed and just last week, there was news from Brazil of the murders of two investigative journalists who specialised in exposing corruption. The CPJ report commends Brazil for its recent progress in investigating crimes against journalists, which is one reason to hope that the perpetrators of the latest murders will be brought to justice, though fighting against impunity remains a challenge.