EURO 2012 and match-fixing: An interview with Simon Kuper

Every four years all eyes in Europe are on one big event – the European Football Championships. Over the past weeks everyone in Europe seemed to talk about the matches, its players, but also about what it means for the two host countries, Poland and Ukraine, to host such a majour event. One big question that was asked again and again was whether UEFA’s decision to let the two countries host the Euro 2012 was the right one, with regards to their political and economic situations. Simon Kuper, journalist and book author, found the time to answer our questions whilst reporting on the Euro 2012 from Ukraine. 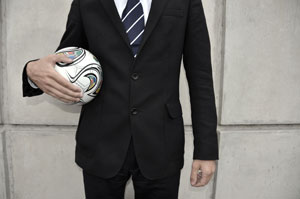 What do you see as the greatest challenges for countries like Poland and Ukraine to put on a big tournament like Euro 2012?

I think by now countries know how to host these events. You just spend billions of dollars of taxpayers’ money on stadiums, airports, hotels, roads to the stadiums etc. You mostly get in international companies who know how to build the stuff. In the end it always gets done, and whether the stadiums are in South Africa or Ukraine, they end up looking much the same.

Certainly there is evidence of match-fixing at some recent world cups.

I’m in Ukraine now, and when you are in one of the new airports or stadiums you wouldn’t know that this is a second-world country. But of course in a few days the tournament will be over, and then all this new infrastructure will be of only limited use to people here, many of whom have to live on a couple of hundred euros a month. So the question isn’t the difficulty of organizing the tournament. The question is whether these countries should want to organize it.

Read more on the website of the 15th International Anti-Corruption Conference where Simon Kuper will be a speaker in Brasilia this November.