The financial sector: a culture of transparency?

The recent global financial crisis highlighted the need to broaden the discussion about regulation and oversight of the financial system. Transparency and related risk assessments of financial institutions have surged to the top of the agenda.

In our study on transparency and disclosure of measures for reducing corruption risk among the world’s largest companies published today, financial companies constitute the single largest industry sector. Among the 24 financial institutions in the survey there are 19 banks, four diversified financial service providers and one insurance company. They are incorporated in 11 different countries: six in the US, four in China, three in Australia, three in the UK, two in Canada and one in each of the following countries: Brazil, France, Germany, Japan, Spain and Switzerland.

The average result in reporting on anti-corruption programmes was 56 per cent, which is the lowest result among all industry groups. While this result reflects the fact that four Chinese banks occupied the last four positions, it is worth mentioning that the remaining financial companies were also below average. 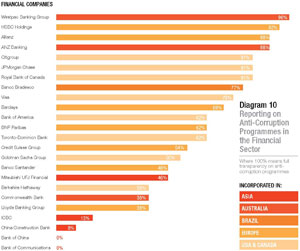 Why the bad score? The reporting we measure is voluntary. Financial companies, although highly regulated, are generally free to choose the level of public disclosure regarding their anti-corruption programmes. 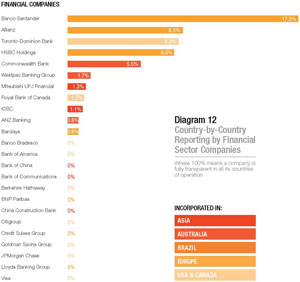 agents and intermediaries, we found that financial companies do not report that their anti-corruption policies extend to such agents and intermediaries acting on their behalf. Nor do they report that they apply anti-corruption standards to other third parties with whom they do business, such as contractors and suppliers.  Facilitation payments are another issue that has rarely been addressed in public information by companies in the financial sector. And disclosure of policies on political contributions and any actual political contributions made is weak. 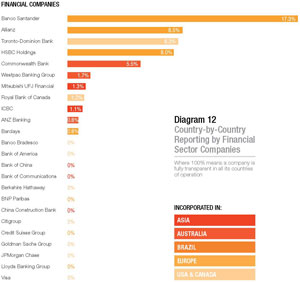 When it comes to disclosing subsidiaries and other holdings, the average result for the financial industry was 67 per cent as compared to 72 per cent for the sample population. Among the financial companies scoring in the top 10 in organizational transparency, there was not a single US financial institution.

The average result for financial companies on country-by-country reporting was a very low 2.3 per cent. The best performer, Banco Santander, received only 17.3 per cent. While reporting even less information, Allianz, Toronto-Dominion Bank, HSBC and Commonwealth Bank performed relatively well compared to their peers. Six other financial companies disclosed almost no information on a country-by-country basis, and the remaining 13 disclosed nothing at all in this dimension.

Transparency International strongly advocates for greater transparency in the financial sector. Multinational financial businesses, those that are ‘too big to fail’, play a critical role in ensuring the soundness of and confidence in the global economy. The results of this research indicate that these financial giants are not sufficiently transparent in reporting on anti- corruption programmes, organisational transparency or country-by-country reporting and should be playing a greater part in combating corruption.

In the context of risk management, regulators and investors must give appropriate consideration to the risks associated with corruption. Lack of transparency is a serious risk factor, giving rise not only to the potential for significant financial loss, but also reputational damage.  Investors and regulators should demand that companies provide them with the information they need to supervise their activities and make investment decisions that are consistent with their financial and ethical obligations and standards.

Furthermore, risk rating agencies as well as corporate responsibility indices should include transparency measures as an integral part of their evaluation process.  Anti-corruption programmes and transparency-enhancing measures lower the risk and incidence of corruption.  Ratings that fail to take into account transparency in reporting are at best incomplete and at worst unreliable.

When financial institutions fail to self-regulate, governmental regulators have an obligation to step in. And where voluntary or obligatory regulation fails, other constituencies, including investors and civil society, must raise their voices and demand greater transparency.

Read the special section of the report about the financial sector.