Recovery of stolen assets is a prime concern for Arab governments at the moment but what role did multinationals play in bribing former corrupt officials?

A six month joint investigation published this week in British papers revealed that the country’s authorities have not been proactive in seizing key assets by the former Egyptian president Hosni Mubarak and his sons Alaa and Gamal.

The wealth amassed by the thirty year regime was aided and abetted with foreign companies paying bribes to former regime officials in exchange for tax breaks and being provided with a freer economic climate to manage their enterprises. 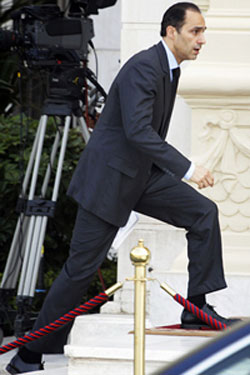 The political events of last year throughout the Arab world were primarily underpinned by economic concerns of endemic poverty. The tumultuous protests, which are still ongoing, sublimely exposed the skewed system of economic distribution that favoured political elites rather than their populations.

The Arab uprisings were enthusiastically supported by European governments such as France and the United Kingdom but our report raises this question: will they make sure that their companies do not offer bribes that corrupt the institutions that are now being reformed.

Other Scandinavian offenders include Sweden’s Scania and Denmark’s Bukkehave benefiting from illicit payments and kickbacks through the much scandalised Iraqi UN Oil for Food programme.

Iraqi prime minister Nouri Al Maliki’s government recently has been accused of a widespread of culture of corruption yet this can not be seen in isolation to a recent history involving European companies and UN officials all benefitting before the occupation in 2003.

The depth of this scandal is made apparent with 14 out of the 15 foreign bribery charges all being related to Oil for Food in Denmark, while in Netherlands seven were settled out of court.

Even though traditionally Scandinavian countries have scored highly on Transparency International’s Corruption Perception Index, these cases make clear that “they are not perfect” and that adequate deterrence needs to be maintained by these governments.

Further, foreign bribery needs to be seen as a grey area phenomenon and it is key to understand the personal dimension of lobbying governments for favourable treatment. A case in point is Austrian lobbyist and businessman Alfons Mensdorff-Pouilly who is charged with ‘facilitating’ telecommunications giant Motorola deals with several unnamed Middle Eastern oligarchs and dynasties.

The extensive research in this report puts forward the idea that corruption is a two way street. This means developing economies need to be as vigilant in monitoring foreign companies and to work with their governments of origin in tangible and holistic approaches to fighting corruption.