14 January 2013 in Europe and Central Asia, Politics and government 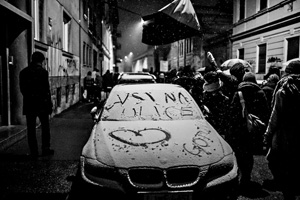 Thousands of Slovenians have been taking to the streets to protest corruption. At the time of high public distrust in politics and rule of law, scandal is pouring oil on the fire. While people are protesting in the streets against corrupt politics, Slovenia’s leaders seem to still think that corruption risks can be tolerated.

Slovenia’s Prime Minister, Janez Janša, and the head of the opposition and Mayor of Ljubljana, Zoran Janković, have been hit by the latest report from the anti-corruption commission on disclosure of assets in year-long investigation of the highest political officials presented a number of violations of financial disclosures obligations.

In the case of Prime Minister Janša, the anti-corruption body’s investigations uncovered private expenses and use of fund in the amount of at least €200.000 from unknown origins that exceed his official income and savings.

In case of Mayor Janković, the investigation uncovered a systemic failure to report his full assets – €2.4 million, and his transactions with the shares of different companies. Several financial chains between companies owned by the Mayor’s sons and companies doing mutli-million businesses with the city were uncovered. Part of these funds were transferred to a private account of the Mayor, according to the report.

Janša and Jankovič rejected allegations and presented their story in the media. The report and the findings in their eyes represents conspiracy and political attempts to discredit them.

The response of the Prime minister and the Mayor was expected and in accordance with the low ethical culture in Slovenian politics – politicising, half-truths, pressures and discretisation of findings and the work of the independent anti-corruption body.

Both sought the shelter of their parties in search for support, as if the members of the parties were the one who elected them. This represents ignorance towards ethical norms and even widens it to the bigger circle of politics. Both easily passed votes of confidence, and 2 days later Mayor Janković froze his presidency of the party.

Meanwhile, President Janša launched political counter-attack. It is obvious that unlike the practice in some parts of the world, where political power-holders immediately resign from office at the time of the occurrence of a suspected violation of law or immoral and unethical acts, in Slovenia politicians and officials shift responsibility for their actions elsewhere.

Outraged by the level of integrity of high politicians in Slovenia, Integriteta – Transparency International Slovenia issued a press release expecting both actors take responsibility for their unethical and illegal actions. We will also call for changes in the laws on disclosure of assets, since only Slovenia and France among 27 EU countries do not fully allow public disclosure of assets.

High public officials should be aware of what trust of the society means for his own integrity, its public function and that any risk of corruption leads to the creation of a double standard.

The question is, when will politicians realize that the success of the country in economic, social and other areas firstly lies in the confidence of the people? This confidence is based on high ethical and moral standards, integrity, transparency and accountability.

The “Modus operandi” of politicians has to change.