It’s time to get moving and act against corruption!

Transparency International Hungary will again be present at this year’s Sziget Festival – the biggest music festival in Hungary and one of the biggest in Europe.

As part of our chapter’s “It’s time to get moving” campaign, dance flashmobs will be present throughout the festival, culminating in a gigantic dance event on 9 August at 16:30, next to the World Music Main Stage, where embassies are also going to be represented. The dance flashmob aims to shake youngsters up from passivity with the help of dance moves, calling their attention to the importance of the fight against corruption.

This tutorial video shows the moves of the dance, so anyone eager to try can learn it and join the flashmob.

The flashmob is part of Transparency International Hungary’s BASE youth programmes. We have already organised several youth-oriented events, with the aim of building up a community of young people who are ready to actually stand up against corruption. As we did last year, this summer we are also organising a big summer campaign (see pictures here from VOLT Festival, 3-6 July 2013 and here from EFFOTT Festival, 25-30 June 2013). These are the locations where we can most easily get through to young people, provide them with chances to learn playfully, using innovative methods such as electronic quizzes. And they can dance together against corruption as part of our campaign. 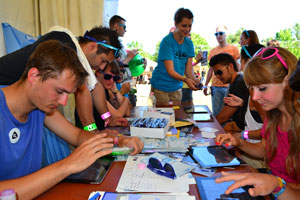 Young people getting involved in the fight against corruption in Hungary

By addressing young people directly, we hope to motivate them to refuse corruption. Reports such as the Global Corruption Barometer 2013 make clear that the majority of people feel the need for such efforts. Seventy-one per cent of the survey’s respondents believe that everyday people have the means to fight corruption, but there are only a very few of those who would actually report corrupt cases.

This is why it is important to teach society how to recognise corruption and how to act against it, for instance by reporting it to the relevant places. We have to talk to young people, explain to them why corruption is a problem, what negative effects it has for the whole of society. Once they understand this, it might become easier to motivate them to say no to it.

If you will be in Hungary please join us and dance against corruption together!