Today’s launch of the 2011  Corruption Perceptions Index, notes Christina zur Nedden of Transparency International’s Communications Department, serves as a timely occasion to reflect on our efforts to fight corruption in 2011.

Corruption high on the agenda

This has been a big year for anti-corruption work and public awareness of corruption has risen substantially. Unprecedented collective activism as witnessed during the Arab Spring and the Indian Summer as well as major corruption-related scandals involving FIFA and News of the World have brought corruption on the world’s agenda and inspired us to work against it.

Lasting change in the Arab World

The uprisings in North Africa and the Middle East gave new momentum to people empowerment this year, but also focused attention on the issue of stolen assets.

We especially called for better international mechanisms to recover assets stolen by dictators and prevent them from ending up in commercial banks. Thanks to the UN Convention against Corruption, NGOs can now go to court to have stolen assets frozen.

TI France together with SHERPA took legal action in France against the stolen assets of three African leaders, which has already led to the confiscation of 11 sports cars worth US $5 million belonging to the leader of Equatorial Guinea, an oil-rich country where over 70 per cent of the population lives below the poverty line. TI France and SHERPA also launched investigations into stolen assets in Tunisia, Egypt, Libya and Syria.

Corruption and petty bribery hit the poor the hardest. To increase living standards in vulnerable communities, we started working with our chapters in Bolivia, Guatemala and Peru to make Conditional Cash Transfer programmes (CCTs) more transparent. CCTs give cash directly to the poorest households that in turn meet “conditions” that improve their livelihoods, such as sending the children to school or getting regular health checkups. 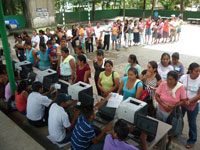 In India, our chapter launched a grassroots initiative to help 8,000 impoverished rural families use their right to demand information from public officials to expose and counter corruption. In one village, half the population turned out to scrutinise public expenditure on an education support programme, identifying falsified records, payments to false names and evidence of bribery.

Hotlines and maps for reporting corruption

TI Ireland has already received over a hundred calls to its whistleblower hotline since setting it up this year. It says that the lack of comprehensive laws in the country makes it harder for people to report corruption and fraud.

Our Indian chapter has set up telephone help-lines to address the grievances of corruption victims in two Indian states: Tamil Nadu and Jharkhand.

They have received calls about police and officials refusing to register their complaints, and requests for advice about dealing with extortion by public servants and filing right to information requests.

The Tamil Nadu helpline has dealt with 3,000 complaints so far, with calls from neighbouring states routine.

Meanwhile, our legal advice centres continue to help people when corruption upsets their daily life, from students in Ghana, migrant workers from Zimbabwe, or a shopkeeper in Azerbaijan.

An ALAC in the Vladimir region of Russia launched a “map of the problems of the region” to which citizens can post and localise issues they come across. The cases are then passed on for consideration to lawyers or other civic groups who make the necessary inquiries to the authorities.

We are now looking at corruption risks in climate change mitigation and adaptation. In March, an investigative journalist in Bangladesh discovered that US $34,000 earmarked for re-forestation projects had been handed to an organisation that trains people to repair computers. TI Bangladesh petitioned parliament, resulting in an official review of the award process. This is just one example of how public money for climate change actions is at risk of being diverted by corruption. Civil society has a pivotal role to play in exposing governance risks in climate finance, through participating in and monitoring budgets, for example.

As we look forward to 2012 let’s voice our commitment to advance transparency, accountability and integrity worldwide on December 9, which is anti-corruption day.