Is the Public watching its Public Officials?

8 October 2012 in Accountability, Politics and government

We have been posting a series of articles on codes of conduct. Scandals from Brussels to Tbilisi show why it is important that public officials live by a code.

Launched in July our blog post series has extolled the benefits and challenges of codes, examined their application in continental and common law countries. 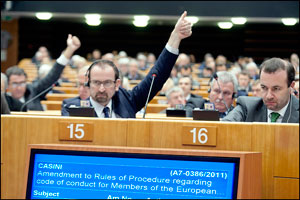 Codes of conduct should prevent corruption among public officials who have been elected, appointed or hired.

But they cannot just remain empty words on paper. We have to make sure that they applied.

The question is, who and what should codes cover?

These divergences have led many countries to devise specific codes for specific public officials: government appointees, elected members of the legislature and civil servants.

As heads of their institutions, government ministers have significant autonomy and discretion in their functions. They have more access to confidential and privileged information, wielding great influence over decision-making processes. Their authority over the allocation of government funds and the approval of programmes requires that they have the strongest controls over their behaviour.

2)      assets – how much personal wealth they have – as the example from Canada notes.

But who has the power to make sure ministers, by nature yielding lots of power and influence, live by these rules? External regulatory agencies may even be ineffective because if are subordinate to the executive branch of government and cannot enforce decisions.

In June 2012, a Transparency International report on corruption in Europe highlighted the lack of rules holding politicians and officials to account.

It called on 25 European countries to establish rules obliging declarations of assets and interests, and said 19 needed to adopt codes of conduct for parliamentarians.

Elected public officials should be kept honest and accountable from the threat of being voted out of office for a violation or scandal. As a result, formal codes of conduct for elected officials tend to be less strict than those for other public officials. Sanctions also often are rare and less severe.

However, the lack of sanctions does not mean that the risk of misconduct is not high, as last year’s Europarliament bribery scandal reminds us.

Typically, elected officials face more potential conflicts of interest given their voting power over critical legislation. To address this specific problem, declarations of interests are often mandatory and more frequent.

General implementation and oversight of the codes often are tasked to a subcommittee in the legislature. This situation of self-regulation has been critiqued given that those tasked with applying the code of conduct are also the ones who the code applies to.

As the recent rail concession fiasco in the UK shows, civil servants can wield extreme power in key – and expensive – policy decisions.

This is the eigth and last post in our series on codes of conduct. Previous posts include:

Yet unlike appointed or elected officials, they do not face the scrutiny of the electorate or the decision of the president or prime minister in power.

This has led countries to develop stricter codes of conduct for civil servants.  It is common for these codes to be included as part of a civil servant’s contractual obligation. These terms of service also clearly specify the causes for and types of sanctions. Whether the code is contractual or legally binding (such as in Brazil where it is included in the country’s constitution) will determine how the code is regulated.

Another substantial difference between regulations for civil servants and other public officials is related to the mandatory and regular declaration of assets. Civil servants often must declare their assets and interests – or to uphold this principle as part of their duties of service, as in the United Kingdom.

Do you think a different code of conduct is needed for ministers, politicians and civil servants in your country? Would it help to keep them clean?